So, i decided to make a chart for the five major movie databases that i have used for researching Star Wars actors. I am aware there are dozens of other movie database websites on the internet, but these are the ones with the most information and i decided to rate them all based on their general accuracy. note that i will not be including any official sources (Ann Skinner, Call Sheets etc.), I will only be using Internet Database websites on the internet. Everything here has been rated based on my personal experience with the websites. 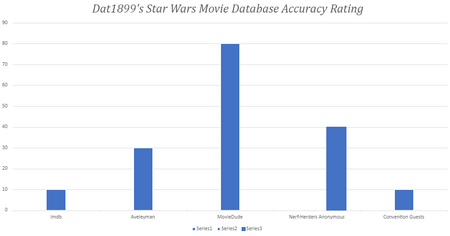 So, the first website we're going to talk about is of course Imdb. Some people that might not be too familiar with researching actors might be surprised that Imdb only has a 10% accuracy, since It's the most popular film database website on the Internet. Well, I'm afraid to say it's the least accurate out of the five. Many of their sources are incorrect and many of them are ripped directly from Aveleyman. However, their sources are so bad that even Aveleyman overrides them in my opinion.

Next up we have of course Aveleyman, a website that was frequently used by Wookiepedians, but that's not the case anymore for obvious reasons. Aveleyman is very inaccurate and it doesn't have any citations or references, therefore, it only has a 30% accuracy rating. They frequently get actors and their film credits wrong, and they often list people with undetermined roles. One example of this is the character Nik Sant. A man named Cliff Alliston had claimed the role of a rebel Scout in the film sometime prior, and he specifically claimed the role of the scout behind Nik Sant. However, i assume Aveleyman made an error, and listed Cliff Alliston as playing Nik Sant. Years later, some continuity polaroids found on the StarWarsArchives website confirmed a man simply credited as "L. Burner" played Sant, and Aveleyman corrected the problem. Sometimes they happen to get some credits right, but that's only when major comparisons are made or when an official source confirms their appearance in the film (Ian Selby, Charlie Gray and John Ketteringham are good example of this).

After that, we have MovieDude's Pictorial Filmography Of Screen Actors. This is in my opinion the most accurate website with an extremely high 80% accuracy rating. Now some of you may be thinking "But that website has no references or citations. Why is it any better than Aveleyman or Imdb?", well, i guess It's because whoever made the website paid a lot of attention to the actors, unlike the creator of Aveleyman. Most of MovieDude's credits happen to be correct, and they also have several of them. They also feature several pictures of the actors in question, which makes them easier to compare with the actors they allegedly played. It also gets many of it's credits from the BFI website, which is from what i heard is extremely accurate and features many of Ann Skinner's continuity checks. So yeah, MovieDude is a fairly accurate website, and that's why It's the highest on the list for me.

After that, we have the second highest ranking website, Nerf-Herders Anonymous, a website specifically dedicated to Star Wars actors. I gave it a 40% rating and there really is nothing much to say about it. The website feels incomplete to me, and i rarely use it because of that. And given there are better alternatives like Moviedude out there, I tend to frequently forget about it. I will say though, it does feature some detailed biographies of actors like John William Ault. So yeah, it's not the worst, but It's definately not the best either.

Finally, we have the website ConventionGuests.com, at 10% accuracy tied with Imdb. Much is unknown about this website since much of it has been taken down, but thanks to Wayback Machine, I was able to investigate. The only thing i like about it is the Youtube channel tied tom it, featuring interviews with many OT actors on the Conguests Youtube channel. But, that's only one of the many things associated with it. In short, the website used to be extremely inaccurate and unconfirmed, and the only thing i like is the Youtube channel. they had messy references and clustered up credits. So yeah, good thing much of that stuff was taken down.

So that's my rating. If you have anything to say about his, express your thoughts in the comments section. Until then, goodbye for now.