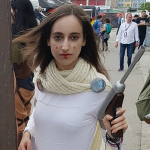 A galaxy far, far away

Being a die-hard fan, she dedicates her life to Star Wars, first as an artist (making Star Wars fan art), then as a member of the cosplay club Club Star Wars Romania (CSWR) and as an admin of the facebook online Star Wars fan community named Star Wars Fan Club Romania (SWFCR). Later, she was employed as a game tester by Electronic Arts, where she is still working today, specializing mostly in testing Star Wars related PC and consoles games.

She is also contributing to Wookieepedia and Lukepedia in her free time, adding or updating articles when time allows her to.

Denisaiko has started her education at countryside, where she spent her kindergarten years and her first elementary school year, taking piano and music classes in parallel. For her second grade she moved to another town and she was admitted to a music and art school where she continued the following elementary years up to the 5th grade.

Before her 6th grade started, her parents got separated and she went to another town with her mother, where she finished her following middle school and high school years, then graduating from the local public music and art high school. Her high school major was singing and vocal arts.

The following years have been spent studying Romanian and English language and literature at a local university, then she went to finish her master studies to a major city. Denisaiko now has a master degree in Anglo-American studies, which include literature, visual arts and film. Here is when her love for Star Wars started to bloom.

Denisaiko was a mediocre student when it came to the visual art classes in high school and earlier. Her passion for drawing and painting came when she started to scribble and draw on pieces of paper as a therapeutic method of coping with her past traumas and depression. She has seriously started to get into drawing after the age of 19, when she has won recognition at her very first visual art contest. Since then, she did not participate in many contests, but she has kept perfecting her technique by herself, occasionally following internet tutorials.

Links to her work (which you should definitely click, no doubt)Edit