74-Z Speeder Bikes Unit Expansion is an expansion to Star Wars: Legion, an asymmetrical two player infantry-based wargame published by Fantasy Flight Games. As indicated by the name, it includes two scale models of 74-Z Speeder Bikes. It was first announced on October 25, 2017.

The howl of a 74-Z Speeder Bike racing past is not something that's easily forgotten. The Empire commonly uses these speeder bikes for scouting and reconnaissance missions, but they can also be deployed to terrifying effect on the battlefield, where their sheer speed often prevents the enemy from taking a clean shot. 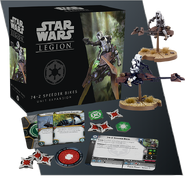