This article is about the young readers book. You may be looking for the 1977 film in which it adapts.

A New Hope is a young readers adaptation of the film of the same name, written and illustrated by Ken Steacy. The book was released by Fun Works on January 12, 1997 and features 24 fully-colored pages.

Strikingly colorful foil brings Luke Skywalker and the characters from the Star Wars epic to life on the pages of this amazing storybook.[2]

After stealing the Death Star plans, Princess Leia and her Rebel friends are fleeing from Darth Vader, a servant of the evil Empire. Just before being captured by Vader, Leia gives the plans to the droid R2-D2, who along with his friend C-3PO, manages to escape to the planet below.[2]

On the planet, the droids are quickly captured by Jawas who sell them to Luke Skywalker. While cleaning R2-D2, Luke stumbles across the first part of a message from Princess Leia, but R2-D2 would only play the rest of the message for someone named Obi-Wan Kenobi. That night, R2-D2 sets across the Dune Sea to deliver the message himself.[2]

The next morning Luke and C-3PO take off after R2-D2 in Luke's landspeeder. They catch up to R2-D2, but are suddenly attacked by Sand People. Fortunately, Ben Kenobi, also known as Obi-Wan, appears and frightens the Sand People away.[2]

Back at Ben's dwelling, R2-D2 plays Leia's desperate message. Ben explains to Luke that he and Luke's father had once been Jedi Knights, warriors who had guarded the galaxy for centuries. Their strength came from the Force, an energy field that unites all living beings in the galaxy. He gives Luke his father's lightsaber and encourages him to join the fight against the Empire.[2]

At a cantina in the Mos Eisley spaceport, Luke and Ben arrange a trip to Leia's home planet, Alderaan, aboard the Millennium Falcon. The pilot was a rogue named Han Solo, and the copilot a large, hairy Wookiee named Chewbacca. When Luke accidentally annoys one of the strange creatures at the bar, the alien wants to fight. In less than a heartbeat, Ben's lightsaber flashes in the darkness, putting an end to the confrontation.[2]

Meanwhile, the princess had been taken to the Death Star, where she refused to tell Darth Vader and Governor Tarkin the location of the Rebel base. Deciding that there is only one way to get her to talk, Tarkin commands the Death Star to fire upon Alderaan. Leia begs for mercy, but is too late, and Alderaan is destroyed.[2]

When the Millennium Falcon pops out of hyperspace, Luke and his friends discover that Alderaan is gone. However, before they can change course, they are captured by a tractor beam and dragged onto the Death Star. Luke, Han, and Chewbacca manage to outwit the Imperial stormtroopers and rescue Leia after a fierce blaster battle. Meanwhile, Ben frees the Millennium Falcon from the tractor beam and goes to rejoin his friends, but he is stopped by Darth Vader.[2]

The old foes attack each other with grim determination, and Ben sacrifices himself to ensure the safe getaway of his friends. Quickly, Luke and his friends make their way to the secret Rebel base. There Luke and Leia prepare for the final battle, knowing that if they fail, darkness would descend over the entire galaxy.[2]

Every Rebel pilot except for Han and Chewbacca takes part in the attack on the Death Star. When the Death Star is only seconds away from firing on the Rebel base, Luke lines up his shot and he hears Ben's voice urging him to use the Force. At that moment, Darth Vader moves his fighter into position directly behind Luke. At the last possible second, Han returns in the Millennium Falcon and blasts Darth Vader off course. Luke fires at the Death Star, blowing it to pieces.[2]

A great ceremony is held back at the Rebel base. The newly polished C-3PO and R2-D2 gleam as brightly as the medals Leia awards to Luke and Han. Luke and his friends had saved the Rebel Alliance and won a major battle in the fight to free the galaxy from the evil Empire.[2]

A New Hope is a standalone, direct adaptation of the 1977 film Star Wars: Episode IV A New Hope, the first installment of the Star Wars original trilogy. Released twenty years after the film, the book is targeted towards young readers, and it uses simplistic language and pictures to suitably convey the story. 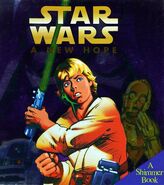 US hardcover
Add a photo to this gallery

In other languages
Retrieved from "https://starwars.fandom.com/wiki/A_New_Hope_(Shimmer_Book)?oldid=10188302"
Community content is available under CC-BY-SA unless otherwise noted.