Adventures in Wild Space: The Snare

Adventures in Wild Space:
The Snare

Adventures in Wild Space: The Escape[1]

When the parents of Milo and Lina Graf are abducted by agents of the evil Empire, the children must undertake a perilous journey across the unknown reaches of Wild Space to rescue them – and to discover hope for the future.

In this first full-length adventure, Milo and Lina look for allies on an ancient frontier world – but the cruel Imperial officer Captain Korda has prepared a trap...[5] 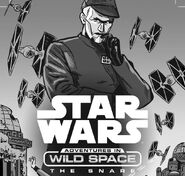