This article is about Official Star Wars Fan Club Newsletter. You may be looking for Homing Beacon (the StarWars.com newsletter), or the fictional Batuu business. 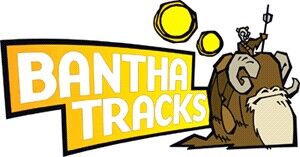 Bantha Tracks, originally known as the Official Star Wars Fan Club Newsletter, was a newsletter published from 1978 to 1987. It is currently a department of Star Wars Insider magazine that focuses on Star Wars fans. Pete Vilmur became the department's editor beginning with issue 157, succeeding Mary Franklin, the department's original editor dating back to 2002.

The name Bantha Tracks was decided in a contest from the Official Star Wars Fan Club Newsletter #2 which allowed fan club members to submit ideas for a less literal name. The winner was Preston Postle of Avon, Ohio, who suggested the name Bantha Tracks. Runner-up names included The Comlink and Inside Star Wars.

The original Bantha Tracks ran for 35 issues until its discontinuation in 1987.

In 2003, StarWars.com released all 35 issues online for Hyperspace members from June to December as Classic Bantha Tracks. And in 2004, they also introduced a new, biweekly, online publication known as Bantha Tracks Online, which remained in publication until at least August 2005.