Wookieepedia
Register
Don't have an account?
Sign In
Advertisement
in: Canon articles, Articles with conjectural titles, Clothing stubs,
and 2 more

Symbol of the Royal House of Naboo[2]

"Naboo resists in its own way."
―Padmé Amidala, referring to the gown's protective properties[src]

The black traveling gown[4] was owned by Queen Padmé Amidala as part of her extensive wardrobe.[3] The ornate black[2] traveling gown[1] was woven with enough Karlini silk to protect the wearer, as well as anyone standing behind her, from blaster bolts.[3] The dress had web-like black designs layered over gold-colored fabric, and the skirt had the symbol of the Royal House of Naboo in gold as a repeated pattern around the hem.[2] The royal gown and headdress[5] were worn by Amidala's handmaiden Sabé when she acted as the Queen's decoy during the Invasion of Naboo.[2]

The costume was created for the 1999 prequel trilogy, Star Wars: Episode I The Phantom Menace, where it was worn by Keira Knightley as Sabé.[2] The finished costume was realized by costume designer Trisha Biggar. Though not worn by Natalie Portman in the film, the finished costume was photographed with Portman modeling it. Identified in Dressing a Galaxy: The Costumes of Star Wars as "Travel Gown I," the costume included handmade lace fabric and a vintage jet-beaded back panel.[6] The spider web-like lace fabric took over a month for one person, working ten hours for five days a week, to create. Originally, the dress was sewn onto a special thin fabric backing, which was then dissolved in water to leave only the stitching on top. The dress was seamless, with each panel of the dress stitched directly onto another panel.[7] 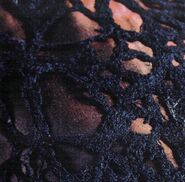