Ives's voice…had the sheen and finesse of opera without its latter-day Puccinian vulgarities and without the pretensions of operatic ritual. It was genteel in expressive impact without being genteel in social conformity. And it moved people.John Rockwell

Burl Ives (June 14, 1909 – April 14, 1995) was an Academy Award–winning actor, author, and renowned folk singer. Ives established a strong presence for himself on the screen, and was directed to an Academy Award by William Wyler for his work in The Big Country.

Ives was also known for his voice work. In 1984 he narrated John Korty's Caravan of Courage: An Ewok Adventure. He passed on in 1995 due to oral cancer.

Caravan of Courage: An Ewok Adventure

Our story begins in a time long, long ago, deep in an enchanted forest, on the distant moon of Endor.Burl Ives as the Narrator

In 1984, Ives came out of retirement to provide narration for John Korty's Star Wars telemovie, Caravan of Courage: An Ewok Adventure. Ives' narration in the film's opening scenes explained the actions of a group of Ewoks who spoke only Ewokese; as the narration continued throughout the course of the film, it provided context to a plot in which a brother and sister had to save their parents from a giant monster.[3]

Burl Ives, whose sweet, strong, mournful way with folk ballads made him an international singing star in the 1940's and whose earthy acting won him an Academy Award in the 1950's, died yesterday at his home in Anacortes, Wash. He was 85.The New York Times obituary, by Richard Severo 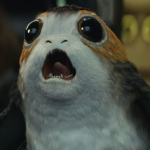