Chewie and the Porgs

Chewie and the Porgs

BB-8 on the Run
Chewie and the Porgs is a canon young readers Star Wars picture book written by Kevin Shinick with illustrations by Fiona Hsieh. It was published by Disney–Lucasfilm Press on December 15, 2017.

A picture book tied to Star Wars: The Last Jedi.

A group of small birds known as porgs are enjoying peace and tranquility on the planet of Ahch-To when their quiet day is shattered by the arrival of a YT-1300 freighter, the Millennium Falcon. The porgs scatter in a panic, but then gather to watch two beings emerge from the Falcon, a young female human named Rey and a male Wookiee named Chewbacca, whom the porgs observe as being covered in fur and hear referred to by the girl as "chewy." They wonder if he might be a food-source, as he appears from their distance to be bite-sized and they are very hungry.

Chewbacca returns to the inside of the Falcon where, with the astromech droid R2-D2 he works to prepare the vessel for Rey's return when the ship's scanners detect intruders. Chewbacca exits to investigate, but the porgs use their natural skills to camouflage themselves. Chewbacca, however, is not fooled for long and the porgs discover to their chagrin that he is not bite-sized. He scares them away with a roar, but one porg stays, not scared by his roar, but flies away at the sound of his rumbling stomach. Chewbacca is hungry, but has nothing to eat.

Chewbacca sets out the next day in search of food, but is constantly hampered by the porgs. He searches for berries, but finds only Ahch-Tonian grubs. He sets a trap, but catches only porgs. He tries fishing using the grubs, but gets no bites, and his remaining bait is eaten by the porgs. He tries asking the Caretakers of Ahch-To for help, only to learn that fishing season is over.

While Chewbacca strikes out, the porgs decide to explore the Millennium Falcon. They are amazed by the ship's many lights and when Chewbacca returns he finds a porg party in progress aboard the vessel. Having had enough, he roars and sends the porgs scattering off the vessel. He then raids the ship's stores, finding a bag of Blue Puff Cubes. He heads outside, builds a campfire and begins roasting one of the cubes, only to then spot a group of porgs gathered around the bag with the remaining cubes. He widens his eyes in shock and then roars, scaring the porgs and then chasing after them. He then, however, notices something sad, that one of the landing struts of the Falcon had crushed the porgs' winter food stores.

Relenting, Chewbacca boards the Falcon and uses the vessel's sensors to scan the island, then calls for the porgs to follow him. He guides them to a hidden lake that has escaped the winter chill and still contains many fish, as it is "Wookiee Fun Fact #1" that Wookiees have hearts of gold. The porgs cluster around Chewbacca in joy and together the group has fun times, as they feast together, play, and discover a new way of playing holochess. Chewbacca eventually has to leave with Rey, but cuddles with a clutch of porgs having learned a valuable lesson, and leaves with several new porg friends aboard the Millennium Falcon. 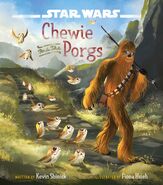 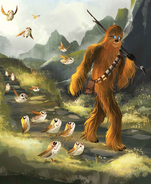