Clan Bralor was an ancient Mandalorian clan that dates back since the Mandalorian Wars. The clan had with roots in the hill-fort town of Norg Bral, on the Outer Rim world Mandalore.

"Only on the battlefield can you truly learn of someone."
―Bralor[src]

Bralor was respected Mandalorian warrior and was the champion of Battle Circle during the Dark Wars. Unlike many of his more aggressive Mandalorians, he respected the Jedi and had study much about them in hopes of understanding them in his quest to best them in combat. Even when being defeated by the Jedi Exile, Meetra Surik, it gained his respect for her. 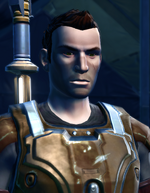 "This is camp for warriors, not hikers. You aren't welcome here."
―Jogo[src]

Jogo, also known as Jogo the Carver, was the son of Salus Bralor. He was hot headed and often called Torian Cadera 'arue'tal' translated as traitor's blood in Mando'a. Jogo would however make the mistake of insulting the Grand Hunt Champion and was killed by him. 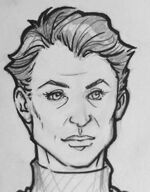 "If Zey thinks I'm trouble, he'll have a nasty shock if he gets Rav Bralor. You know what Mando females are like."
―Kal Skirata[src]

Rav Bralor was among the Mandalorian elite to be hired by Jango Fett to train the Clone army, having been the one to train the Clone Commando Squads, Vevut Squad and Yayax Squad. After her duties as a trainer were over, she went back to Mandalore to help maintain the Kyrimorut. She was present when Etain Tur-Mukan's body was brought back and prepared the body for cremation.

"I'm with the Mand'alor on this. We lost nearly a million and a half people fighting the vongese. That might be small change for Coruscant, but it's a disaster for us. No more—not until we get Manda'yaim in order."
―Neth Bralor[src]

By time of the Second Galactic Civil War the leadership of Clan Bralor would fall under Neth Bralor. During the meeting between the clan chieftains, mercenaries, and heads of Mandalorian corporations to discuss Mandalore's position in the war. Neth Bralor had agreed with the current Mand'alor Boba Fett to stay neutral in the fighting in favor of rebuilding Mandalore from the attack by Yuuzhan Vong during their invasion on the galaxy.

In other languages
Retrieved from "https://starwars.fandom.com/wiki/Clan_Bralor?oldid=8581854"
Community content is available under CC-BY-SA unless otherwise noted.