It is based on the story by George Lucas and the screenplay by Lawrence Kasdan and George Lucas.

The Rebels plan a daring attack on the Empire's greatest weapon, the Death Star. While Han Solo travels to Endor to disable the Death Star's defense shield, Luke must face not only Darth Vader but the Emperor himself! 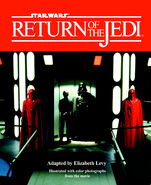 2004 Young Readers version
Add a photo to this gallery
Retrieved from "https://starwars.fandom.com/wiki/Classic_Star_Wars:_Return_of_the_Jedi_(Random_House)?oldid=8405456"
Community content is available under CC-BY-SA unless otherwise noted.