Covert Missions is an expansion for the card and dice game Star Wars: Destiny made by Fantasy Flight Games. It was announced on July 16, 2019 and later revealed, on January 14, 2020, that it would be the final expansion of the game. The expansion was released on March 6, 2020.

Covert Missions expands on the themes of the Convergence Block by continuing to place an emphasis on sub-types, downgrades, and plots ! In this set, look for a new keyword, iconic characters, and two new plots that provide an alternate victory condition. 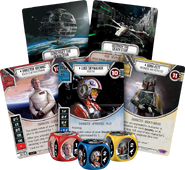