Heir to the Empire

Dark Force Rising is the second entry in The Thrawn Trilogy, written by Timothy Zahn, published by Bantam Spectra in May 1 1992. It takes place in 9 ABY. Dark Force Rising was adapted into a comic in 1997. Narration for the audio versions was performed by Anthony Daniels. Two unabridged versions for the blind were read by Chuck Benson and Larry A. McKeever.

The number-one New York Times bestselling Heir to the Empire was the publishing event of the year, the first novel to continue the adventures of Luke Skywalker, Princess Leia, and Han Solo, beyond the events of the most popular trilogy in movie history. Now comes Dark Force Rising, the second volume of a three-book cycle authorized by Lucasfilm Ltd. and written by Hugo Award-winning author Timothy Zahn.

Five years after the events of Return of the Jedi, the fragile Republic that was born with the defeat of Darth Vader, the Emperor, and the infamous Death Star stands threatened from within and without. The dying Empire's most cunning and ruthless warlord—Grand Admiral Thrawn—has taken command of the remnants of the Imperial fleet and launched a massive campaign aimed at the Republic's destruction. With the aid of unimaginable weapons long hidden away by the Emperor on a backwater planet, Thrawn plans to turn the tide of the battle, overwhelm the New Republic, and impose his iron rule throughout the galaxy.

Meanwhile, dissension and personal ambition threaten to tear the Republic apart. As Princess Leia—pregnant with Jedi twins—risks her life to bring a proud and lethal alien race into alliance with the Republic, Han and Lando Calrissian race against time to find proof of treason inside the highest Republic Council—only to discover instead a ghostly fleet of warships that could bring doom to their friends and victory to their enemies.

But most dangerous of all is a new Dark Jedi, risen from the ashes of a shrouded past, consumed by bitterness…and thoroughly, utterly insane. Now he schemes to use his awesome mastery of the Force to summon young Skywalker, allay his misgivings, cunningly enthrall him, and ultimately corrupt him to the Dark Side.

A tale of brilliant spectacle, startling revelations, and tumultuous action, Dark Force Rising moves with the speed of light across a dazzling epic landscape of galactic proportions, from world to world, from adventure to adventure, as Good and Evil clash across the vastness of space "a long time ago, in a galaxy far, far away.…"

The dying Empire's most cunning and ruthless warlord—Grand Admiral Thrawn—has taken command of the remnants of the Imperial fleet and launched a massive campaign aimed at the New Republic's destruction. Meanwhile, Han and Lando Calrissian race against time to find proof of treason inside the highest Republic Council—only to discover instead a ghostly fleet of warships that could bring doom to their friends and victory to their enemies.

Yet most dangerous of all is a new Dark Jedi, risen from the ashes of a shrouded past, consumed by bitterness…and scheming to corrupt Luke Skywalker to the Dark Side.

Because of the events that led up to the Battle of Sluis Van in the previous novel, lead smuggler Talon Karrde has left his base on Myrkr and is now fleeing from Grand Admiral Thrawn's Imperial forces. Meanwhile, Luke Skywalker meets the insane Joruus C'baoth and agrees to be taught by him on the planet Jomark to further his knowledge of the Force. However, when Thrawn captures Karrde, Mara Jade finds that she once again needs help from Luke, the man she so hates under the belief that he killed her beloved master, Emperor Palpatine, during the Battle of Endor five years earlier. So Mara travels to Jomark, and she and Luke defeat C'boath just as he tries to kill them for taking Luke away from the training, which Luke and Mara both know is psychologically compromised due to C'boath's insanity. The two of them infiltrate Thrawn's Empire and save Karrde.

In the continuing search for Delta Source, the New Republic source believed to be spying for Thrawn, Han Solo and Lando Calrissian try to find evidence at the planet New Cov, with Luke helping before he left for Jomark. At New Cov, it is believed that one of Senator Borsk Fey'lya's advisers is a traitor to the New Republic for Thrawn, and is thus a primary suspect for Delta Source. But before Han, Lando, and Luke can find any real evidence concerning Fey'lya's adviser, they find out that Thrawn's forces have arrived on the planet. They manage to escape, and Han and Lando are saved by a third party, which takes them to an unknown location where they meet the legendary General Garm Bel Iblis, one of the initial members of the Alliance to Restore the Republic. Bel Iblis declines to help the New Republic defeat Thrawn because of personal problems with Chief of State Mon Mothma.

Elsewhere, Leia Organa Solo keeps the promise she made with the Noghri known as Khabarakh back on the planet Kashyyyk in the previous novel and arrives on Khabarakh's devastated home planet of Honoghr. Leia manages to get the entire Noghri race to side with the New Republic against Thrawn by exposing the fact that it was the Empire that devastated Honoghr, not the Alliance to Restore the Republic.

The novel climaxes when the New Republic finds out from Talon Karrde that an old superior of his, Captain Hoffner, exposed the secret of the legendary Katana fleet to Thrawn. This fleet of 200 Dreadnaughts would tip the balance of power decisively in Thrawn's favor over the New Republic. During the battle for the Katana fleet, the New Republic manages to destroy some of the cruisers, but Thrawn wins most of them.

In the book, Mara Jade mentions Darth Vader losing his right hand at the hands of Palpatine after his failure at the Battle of Yavin. Ten years later, the prequel trilogy would establish that he originally lost his hand in a duel with Count Dooku in 22 BBY.

Vader's right hand was severed at least two other times: on Mimban, to Luke Skywalker's lightsaber, in Splinter of the Mind's Eye; and during the Battle of Endor in Return of the Jedi. Both of these would have been after the incident Mara reported, and she may not have known of any of the other incidents when explaining the loss of Vader's hand to Luke.

In Splinter of the Mind's Eye, Luke notes that Vader's arm did not bleed as much as he expected, implying that the arm may have been a prosthetic already, especially bearing in mind that the idea of lightsabers cauterizing wounds had not yet been established in Star Wars lore when Splinter was written.

Furthermore, Leia was informed that Honoghr was devastated in the Clone Wars 44 years before 9 ABY. Meaning, this Clone Wars battle would have occurred in 35 BBY. This impossible as later sources confirm the Clone Wars as taking place from 22-19 BBY. 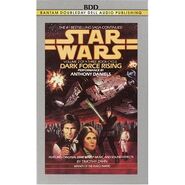 Russian - Возрождение Тьмы (1996 Edition). Notice the reuse of artwork from the cover of The Truce at Bakura

In other languages
Retrieved from "https://starwars.fandom.com/wiki/Dark_Force_Rising?oldid=9184200"
Community content is available under CC-BY-SA unless otherwise noted.