"The old system is dead, Senator. You would be wise to subscribe to the new one."
―Darth Vader[src]

Dark Lord: The Rise of Darth Vader is a novel written by James Luceno and published by Del Rey. Dark Lord takes place in the immediate aftermath of the events in Star Wars: Episode III Revenge of the Sith and focuses on Darth Vader and his rise to prominence in the newly-inaugurated Galactic Empire.

Author Luceno devotes much of Dark Lord to the internal conflict that Darth Vader undergoes as he tries to slough off his former identity of Anakin Skywalker. Palpatine intends for these early missions that he sends Vader on to be as much about learning what it means to be a Sith as they are about consolidating the rule of the nascent Empire.

Ostensibly a story about Darth Vader's rise, the book instead concerns itself with the story of a pair of Jedi for large sections of the text.

Throughout the galaxy, it was believed that Jedi Knight Anakin Skywalker—the Chosen One—had died on Coruscant during the siege of the Jedi Temple. And, to some extent, that was true. Anakin was dead.

From the site of Anakin Skywalker's last stand—on the molten surface of the planet Mustafar, where he sought to destroy his friend and former master, Obi-Wan Kenobi—a fearsome specter in black has risen. Once the most powerful Knight ever known to the Jedi Order, he is now a disciple of the dark side, a lord of the dreaded Sith, and the avenging right hand of the galaxy's ruthless new Emperor. Seduced, deranged, and destroyed by the machinations of the Dark Lord Sidious, Anakin Skywalker is dead… and Darth Vader lives.

Word of the events that created him—the Jedi Council's failed mutiny against Supreme Chancellor Palpatine, the self-crowned Emperor's retaliatory command to exterminate the Jedi Order, and Anakin's massacre of his comrades and Masters in the Jedi Temple—have yet to reach all quarters. On the Outer Rim world of Murkhana, Jedi Masters Roan Shryne and Bol Chatak and Padawan Olee Starstone are leading a charge on a Separatist stronghold, unaware that the tide, red with Jedi blood, has turned suddenly against them.

When the three narrowly elude execution—and become the desperate prey in a hunt across space—it's neither clone soldiers, nor the newly deployed stormtroopers, nor even the wrath of the power-hungry Emperor himself they must fear most. The deadliest threat rests in the hideously swift and lethal crimson lightsaber of Darth Vader—behind whose brooding mask lies a shattered heart, a poisoned soul, and a cunning, twisted mind hell-bent on vengeance.

For the handful of scattered Jedi, survival is imperative if the light side of the Force is to be protected and the galaxy somehow, someday reclaimed. Yet more important still is the well-being of the twin infants, Leia and Luke Skywalker, the children of Anakin and his doomed bride, Padmé Amidala. Separated after Padmé's death, they must be made safe at all costs, lest the hope they represent for the future be turned to horror by the new Sith regime—and the unspeakable power of the dark side.

Part I: The Outer Rim SiegesEdit

Jedi Masters Roan Shryne, Bol Chatak and Padawan Olee Starstone land on Murkhana with a contingency of clone troopers. Using information from a captured mercenary, Shryne leads a surgical strike on Murkhana City much to the dismay of Commander Salvo who preferred a strike from aboard the Star Destroyer Gallant. Joined by clone commando Climber and his Ion Team, Shryne leads the attack on the Separatist's shield generator, successfully completing their mission.

During preparations to rendezvous with the other Republic forces, Climber is contacted by Salvo with the order to exterminate the Jedi. Conflicted by this command and his loyalty to his comrades, Climber instructs Ion Team to disrupt the planned ambush on the Jedi. A quick standoff ends with Climber allowing Shryne, Chatak and Starstone a head start before starting the hunt. Salvo loses most of his trust in Climber and his team and keeps his eye on them.

Shryne and the others decide to abandon their Jedi garb and gear in an attempt to escape the planet, but are captured by the troopers.

Four standard weeks pass since the events of Order 66, with the downfall of the Jedi Order and the rise of the Galactic Empire over the Old Republic. Darth Vader, apprentice to the newly proclaimed Emperor Palpatine, alias Darth Sidious, and second-in-command in the Empire, is sent to Murkhana by Palpatine himself to investigate allegations of disloyalty from clones failing to carry out Order 66. Vader investigates and engages in a lightsaber duel with Bol Chatak; the Sith Lord wins by decapitating Chatak. Shryne and Olee escape Vader's wrath, seeking transportation offworld. Shryne and Olee find that transport through the Drunk Dancer, a freighter, and the former Jedi meets his mother, Jula.

Olee and Shryne part ways: Shryne stays with his mother, Olee goes in search of other Jedi survivors with the other Jedi. Meanwhile, Skeck, Archyr, Jula and Shryne—having parted ways with Fili to help Olee track Jedi—go to Alderaan to rescue Sern Prime's Senator Fang Zar. Darth Vader, having been sent by Palpatine to kill the Senator, confronts Shryne as they are about to escape. Zar and Jula are struck by Vader's lightsaber and Zar is killed. Luckily, Jula is rescued despite her wounds.

On Kashyyyk, Shryne and Starstone, along with the native Wookiees, fight the stormtroopers of the Empire as an attack on the planet begins. Two of the Jedi are killed while Darth Vader fights Starstone. Shryne intervenes and fights Vader, telling Starstone to flee. Chewbacca flies the remaining Jedi to the Drunk Dancer as Vader reveals himself to Shryne and kills him by fatally wounding him via the dark side of the Force. Kashyyyk falls to the Empire.

The epilogue depicts Obi-Wan Kenobi, now under the guise of Ben Kenobi living as a hermit on Tatooine to watch over the infant Luke Skywalker from a distance. Kenobi is shocked at the news to hear that Darth Vader, whom he believed he killed in his duel against him on Mustafar, is alive. He is then contacted by the spirit of his late Master, Qui-Gon Jinn, who assures him that Luke will grow to confront his father when the time is right and that Vader will never step foot on Tatooine ever again, for fear of his memories coming back to haunt him. 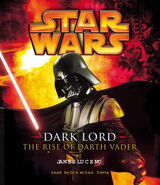 Luceno told the magazine Star Wars Insider about a discussion he had with Ryan Kaufman, formerly of LucasArts, who had worn a Darth Vader costume during the production of a number of LucasArts Star Wars video games. Kaufman's description of what it was like to wear the suit led Luceno to dedicate a substantial amount of the novel toward Vader's struggling with the discomfort of his new prosthetics and armor.

According to Luceno, the book was not supposed to be primarily about Vader while he was writing it; the title was applied to the book only after he had finished the manuscript.

An error at the beginning of Chapter 9 states that the Venator-class Star Destroyers were not made by Kuat Drive Yards, when in fact they were.

An error in Chapter 37 of the novel mistakenly refers to the Star Destroyer Executrix as the Executor.

An error in the novel is that Appo and his troops are incorrectly described as red-armored Coruscant shock troopers, not blue-armored 501st troopers.

In other languages
Retrieved from "https://starwars.fandom.com/wiki/Dark_Lord:_The_Rise_of_Darth_Vader?oldid=8681884"
Community content is available under CC-BY-SA unless otherwise noted.