Darth Vader: A 3-D Reconstruction Log is a reference book on the inner workings of Darth Vader's iconic suit. It was written by Daniel Wallace, with illustrations by Chris Trevas and Chris Reiff. The book was published by Scholastic Trade Bookgroup, produced by becker&mayer!, and released in the United States on October 1, 2011.

According to Chris Trevas, "The format will be the same as our previous book The Millennium Falcon 3D Owner's Guide by Ryder Windham."[4]

While the publisher's summary from becker&mayer! uses the word "Surgical" in the title, the cover image used in the final product has the word "Reconstruction."

Darth Vader: A 3-D Surgical [sic] Log presents a head-to-toe view of the galaxy's greatest villain. All of his systems—sense organs, biological implants, armor, computers, and more—are explained and explored with notes from the droids who performed the surgeries, call-outs, illustrations, and diagrams. As the pages are turned, Vader's inner workings are revealed within the die-cut window. When the book is closed, the layers fit together to create a complete model of the Sith Lord. 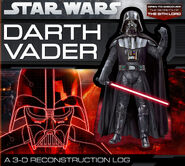 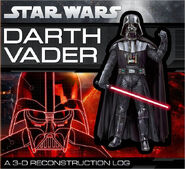 Unused cover
Add a photo to this gallery

In other languages
Retrieved from "https://starwars.fandom.com/wiki/Darth_Vader:_A_3-D_Reconstruction_Log?oldid=8825531"
Community content is available under CC-BY-SA unless otherwise noted.