Wookieepedia
Register
Don't have an account?
Sign In
Advertisement
in: Real-world articles, Star Wars: Edge of the Empire sourcebooks

Already, you have experienced the grim realities of life at the Edge of the Empire. Now, it's time to go even further into the most dangerous reaches of the galaxy. It's time to Enter the Unknown.

This first rules supplement for Edge of the Empire expands the Explorer career with specializations, new talents, and more. All players will find new character, vehicle, and equipment options, which will aid in their experiences at the Edge of the Empire. GMs will gain new tools to use in crafting exciting and memorable adventures. 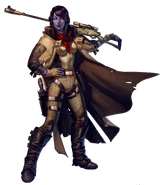