Wookieepedia
Register
Don't have an account?
Sign In
Advertisement
in: Real-world articles, From a Certain Point of View

From a Certain Point of View

"Far Too Remote" is a single-panel comic in the anthology From a Certain Point of View. It was written and drawn by Jeffrey Brown, and is set on the planet Dantooine.

Brown started by doodling in his sketchbook before he decided on the final idea.[2] 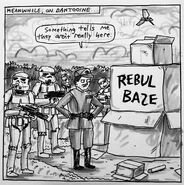 In the end, he chose to draw the Imperial troopers who searched Dantooine for the Rebel base. He included the cardboard boxes as a nod to his Darth Vader and Son books.[2] 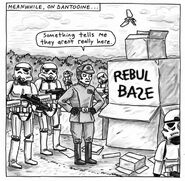 In the final sketch, the leading officer was made into General Cassio Tagge, who was leading the search in prior works.[2]

Presumably because the story is presented in comic format and does not work without visuals, it is not included on the audiobook release of From a Certain Point of View.