Wookieepedia
Register
Don't have an account?
Sign In
Advertisement
in: Canon articles, Articles to be expanded, Articles with conjectural titles,
and 2 more

Using the Force, the Jedi[2] and the Sith had the ability to deflect energy-based attacks like blaster bolts[1] and Force lightning.[2]

In 232 BBY,[4] during the High Republic Era, Jedi Master Porter Engle fought a pair of Nihil on Elphrona when a party of the raiders attempted to kidnap the wealthy Blythe family for ransom. During the skirmish, Engle temporarily parted with his lightsaber when he threw it to eliminate one of the raiders. Before he could retrieve his weapon, the other raider fired at him, forcing Engle to deflect the shots with the Force.[5]

In 22 BBY,[6] Jedi Grand Master Yoda confronted his former Padawan learner Dooku, secretly the Sith Lord Darth Tyranus, in a hanger on Geonosis during the First Battle of Geonosis. Tyranus, who had previously defeated Obi-Wan Kenobi and Anakin Skywalker, exclaimed his superiority over his former Master and fired a blast of Force lightning at Yoda. Yoda deflected the blast back at Tyranus, who in turn used the Force to deflect the blast into the ceiling of the hanger.[2]

In 19 BBY,[6] Darth Sidious and Darth Tyranus used the dark illusion power on Yoda in an attempt to corrupt the Grand Master. As a result, Yoda experienced a Force vision where he fought Sidious. During the vision, Sidious fired a blast of Force lightning at Yoda. Yoda was able to successfully deflect Sidious' Force power, sending the Dark Lord of the Sith tumbling off of the structure they were situated on.[7]

Sometime later, former Jedi Padawan Ahsoka Tano confronted the renegade Sith Lord Maul in the Grand Salon of the Sundari Royal Palace during the Siege of Mandalore. Lady Bo-Katan Kryze, who was accompanying Tano at the time, charged at Maul while firing multiple blaster bolts at him. In response, Maul effortlessly veered the bolts with waves of his hand before briefly levitating Kryze to dissuade further attacks.[8]

Shortly after the formation of the Galactic Empire, Yoda confronted Darth Sidious in the Senate Building on Coruscant, intending to assassinate the new Galactic Emperor. Mirroring the dark illusion Sidious had previously subjected Yoda to, the Sith Lord fired a blast of Force lightning at the Jedi Grand Master. Just like before, Yoda was able to deflect Sidious' lightning, although he fell off of the repulsorpod he was standing on in the process.[9]

During the Invasion of Mon Cala in 18 BBY,[10] the Sith Lord Darth Vader fought in the Battle of Dac City. In the battle, the Mon Cala planetary defense services fired upon Vader, who used the Force to deflect a blaster bolt.[11] In 14 BBY,[12] Governor Wilhuff Tarkin remarked that one of the reasons it was difficult to kill Vader was because he could deflect blaster fire with the flick of his wrist.[13] 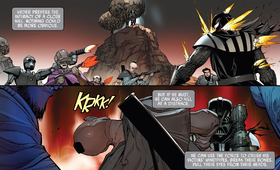 In 0 BBY,[14] during the Battle of Scarif, Vader boarded the rebel cruiser Profundity in pursuit of the stolen Death Star plans. The Sith Lord received resistance aboard the star cruiser from the Alderaanian consular security. Vader cut through the soldiers, using Force deflection to redirect a blaster shot into a rebel, however the plans escaped aboard the corvette Tantive IV.[15]

In 3 ABY,[6] Lord Vader prepared an ambush for Han Solo and the crew of the Millennium Falcon on the Tibanna-mining colony Cloud City. When the Administrator of the city Lando Calrissian led Solo into the trap, the rebel smuggler immediately fired on Vader. Vader proceeded to block the blaster bolts with the Force and telekinetically yank Solo's blaster out of his hands.[1] Following Vader's revelation that Luke Skywalker was his son and their subsequent duel on Cloud City, the dark lord sought to learn about his son's past. His search eventually led him to the planet Vendaxa, where he encountered a look-alike of his deceased wife Padmé Amidala. Upon learning that Vader was a servant of the Emperor, the look-alike, who was actually Amidala's former Handmaiden Sabé, fired her blaster at the Sith. Vader deflected the laser with the Force and pulled the blaster out of Sabé's hands.[16] Vader had mastered the ability to an extent where incoming blaster attacks were no longer his concern, as he was absorbing them, while challenging Tarkin.[17]

In a display of this power being used against non-energy attacks, Luke Skywalker deflected thrown grenades back at the Imperial soldiers who attack him, killing them in 4 ABY.[18]

In 35 ABY, Rey Skywalker used Force deflection to block the Sovereign Protectors' blaster bolts during her confrontation with her grandfather Emperor Palpatine during the Battle of Exegol.