Dark side of the Force[1]

"How does one defend against such power?"
"A wise master does not reveal all his secrets at once. In due time, my apprentice."
―Savage Opress and Darth Tyranus, after electrocuting Opress with a barrage of Force lightning[src]

Force lightning was a Force power utilized by Dark Side Force Users, the Sith most prominently among them.[6] The technique involved a discharge of electrical energy from the practitioner's hands[1] resulting in electrocution and even disfigurement if the target was hit with it.[7] Chain lightning was a variant in which the burst of lightning delivered would first hit a single target and then spread to those around them.[8]

Targets could deflect the discharge using a lightsaber. Some powerful Force-users were also capable of absorbing it using only the Force,[2] but only for a short while, and at the price of immense effort.[9] Gungan personal energy shields were also capable of repelling Force lightning.[10]

when he refused to embrace the Dark Side. Count Dooku frequent use of it during the Clone Wars. Also, the force sensitive being known as the Son summoned a red variation of the more commonly blue energy.

Non-Sith were also known to use this ability. Mother Talzin used Force lightning that was powerful enough to block Darth Sidious' lightning.[11] Snoke was also able to use Force lightning, as demonstrated when he swiftly struck Kylo Ren down when the latter made a threatening move, though his use of the ability varied greatly from previous practitioners, as he projected electrical energy

against the floor, causing it to bounce upward and knock his apprentice off his feet. [3]

In some cases, the lightning intensity was so high that the victim's skeletal system started glowing and could be seen through his or her skin—as demonstrated with Mace Windu[7]—or even through heavy armor.[1] 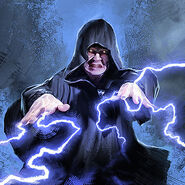 Force lightning first appeared in Star Wars: Episode VI Return of the Jedi, the final film of the original Star Wars trilogy. In the Expanded Universe, now re-branded as Star Wars Legends, Force lightning had a number of useful variants and could be summoned even by Jedi. These uses, however, are no longer considered canon and in canon media only practitioners of the dark side of the Force have been observed using the skill.

In other languages
Retrieved from "https://starwars.fandom.com/wiki/Force_lightning?oldid=7685907"
Community content is available under CC-BY-SA unless otherwise noted.