watch 03:27
Wiki Targeted (Entertainment)
Do you like this video?
Play Sound

The Galactic Roundel dates back thousands of generations to the Bendu monks. In their study of numerology, they believed that the number nine signified the beneficent presence of the Force in a united galaxy. The insignia was meant to represent the number nine with its eight spokes joined to one disc.[1] The Tho Yor were also decorated with symbols reminiscent of the Galactic Roundel. As the Jedi were founded from the Bendu, the Insignia of Unity was eventually adopted to become the symbol of the Galactic Republic.

During the Old Sith Wars the Republic used a nine-spoke symbol and put it on their ships.

Later on the Galactic Roundel once again had become the symbol of the Republic and unity. One was placed on the podium of the Galactic Senate Rotunda and up until Palpatine's proclamation one adorned the Hall of Justice on Alderaan.[2]

In 25 BBY the Rotunda had undergone a desperate renovation at which point the emblem that sat on the podium was replaced by a counterfeit. The counterfeit was placed by the Republic Group who believed the symbol could be used to reawaken and rouse those who had fallen under Palpatine's sway. The Republic Group had the symbol moved to Tandun III for safe keeping.

During the Clone Wars numerous Republic vehicles and vessels were marked with the Galactic Roundel. Some of these vessels included the Republic Gunship and the UT-AT.[1] The symbol was also used on the Jedi Starfighter and Jedi Interceptor. However, late in the Clone Wars Jedi Knight Anakin Skywalker, for unknown reasons, placed a reduced six-spoke emblem on his customized interceptor.[1]

In 19 BBY the Republic Group had started to worry about the dark direction the Republic was now taking. The group decided it was time to re-relieve the icon they had hidden on Tandun III to the galaxy, hoping it would restore Republic honor. They tasked Captain Tobb Jadak with delivering the Stellar Envoy to an Antarian Ranger named Aren Folee. Folee was then to use the Stellar Envoy to retrieve the "treasure". After a debacle with the Senate Bureau of Intelligence, Captain Jadak was critically injured and the Stellar Envoy was lost preventing the Republic Group from completing their mission. The knowledge of this mission would be locked away in Jadak's memories while he was in a coma and the truth about the insignia would only be known by Lestra Oxic for decades.

During the rise of the Empire, Palpatine would change the Galactic Roundel by the removal of two spikes; the resulting icon was the Imperial crest.

At the end of the Galactic Civil War, the New Republic reinstated the Old Republic's Galactic Roundel, but due to its similarity to the Imperial Crest, it was not widely adopted as an official symbol and the Alliance Starbird all but supplanted it.

Han, Leia, and Allana Solo in 43 ABY, during a quest to learn the history of the Millennium Falcon, had finally discovered the history of the Galactic Roundel that was removed from the Senate Rotunda decades earlier. Led to Tandun III by the Millennium Falcon and the now reawaken Tobb Jadak the Solo's found the insignia and learned its history from Lestra Oxic who followed them there. The insignia on Tandun III, much like its companion in the Rotunda, was a fake and the location of the real icon was never discovered.

A reduced Galactic Roundel used during the Clone Wars 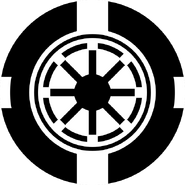 symbol of the Coruscant Security Force during the Old Republic 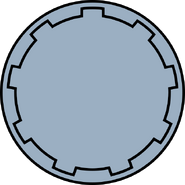 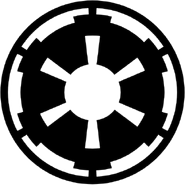 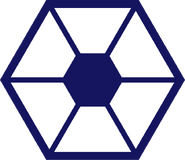 Interestingly, in Revenge of the Sith during the Battle of Coruscant, Anakin's fighter bears a six-spoke symbol instead of the eight-spoke symbol seen through-out the rest of the movie. This can be seen when R2 fights the buzz droid. In the Star Wars: Revenge of the Sith Incredible Cross-Sections it is explained that this symbol is a reduced form of the one used by the Republic during the Unification Wars, and likely the precursor to Palpatine's Imperial symbol.

The idea that Palpatine corrupted the Galactic Roundel is likely based on Nazi appropriation of the swastika, an ancient and benign symbol found in many cultures, to symbolize the Aryan race. Because of acts committed by the Germany's Nazi Party regime, the symbol is now reviled by many as a result.

Another similarity between the Old Republic and India is the close resemblance of the symbol in both appearance and meaning to the dharmachakra, a Buddhist, Jain, and Hindu symbol of unity that appears on the Indian flag. This may indicate some link between the Bendu beliefs and dharma. Links between Jedi beliefs and eastern philosophy have been theorized before.

The dharmachakra or "wheel of dharma" is also eight-spoked, and is closely related to the dharmic swastika symbol, indicating another possible connection to the Nazi adoption of the swastika.

In Tales of the Jedi: The Sith War, Republic Navy starships are emblazoned with a blue nine-spoke symbol. Coincidentally, the flag of the Khoonda on Dantooine (3956 BBY to 3951 BBY) which appeared 39 years later in Star Wars: Knights of the Old Republic II: The Sith Lords, had a nine-spoked blue symbol.

The Bendu symbol, having eight spokes, is also similar to the Buddhist's symbol for the Noble Eightfold Path, a wheel formed with eight spokes.

One must also consider the much more ancient symbol of Shamash, an ancient Sumerian god of the Sun (also of light), justice, and of salvation who also existed in later Mesopotamian polytheistic beliefs. His symbol also included eight rays of the sun converging on a central disk, and his embodiment of the Jedi values would render it a theory.

In other languages
Retrieved from "https://starwars.fandom.com/wiki/Galactic_Roundel?oldid=10263656"
Community content is available under CC-BY-SA unless otherwise noted.