This article is about a series of videos. You may be looking for the timeline of galactic history. 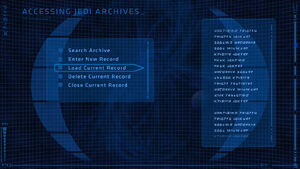 Galactic Timeline is a series of in-universe videos that provides backstory for the Star Wars: The Old Republic video game. The videos were released on StarWarsTheOldRepublic.com and presented in the form of record entries made in the Jedi Archives by Jedi Master Gnost-Dural who narrates the history of the Galactic Republic and the Jedi Order.

The narration follows a reverse order, beginning from the Treaty of Coruscant and going back to the events that led to it; it spans the Jedi Civil War, the Old Sith Wars. Unproduced chapters would have included the formation of the Republic, the Second Great Schism and ended in the discovery of the Force on Tython into the Pre-Republic years.

After Timeline 12, the remaining videos were discontinued in early 2011, as the content was growing less relevant to the game.[1]

In other languages
Retrieved from "https://starwars.fandom.com/wiki/Galactic_Timeline?oldid=8959404"
Community content is available under CC-BY-SA unless otherwise noted.