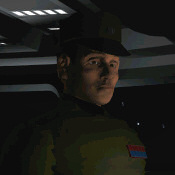 Garreth Holtz (–3 ABY) was a Human Admiral in the Imperial Navy.

Holtz commanded the Imperial I-class Star Destroyer Corrupter during the Galactic Civil War. His ship participated in the Battle of Hoth, where it sustained massive damage due to the Rebel planetary ion cannon. Holtz would later take the ship, which now lacked a sensor dome, on several missions in the name of the Galactic Empire, including the destruction of a Rebel hospital and the seizure of Twin Suns Transport Services.

Following this mission, he was assigned the task of locating the Alliance fleet commanded by the Mon Calamari Star Cruiser Defiance. After failing to capture the Defiance task force, Holtz was assigned to stop pirate activity in the Outer Rim Territories as punishment.

During this time, he encountered Rebel activity once again when he interfered with an Alliance-smuggler meeting and captured Dunari's Casino. Holtz is believed to have died when Corrupter was destroyed while attempting to stop a Rebel counterstrike against the Hurrim.

Retrieved from "https://starwars.fandom.com/wiki/Garreth_Holtz?oldid=518756"
Community content is available under CC-BY-SA unless otherwise noted.