This article is about the individual Rebel starfighter pilot. You may be looking for Gold Squadron, the starfighter unit with which this pilot fought during the Battle of Endor.

We're on our way. Red Group, Gold Group, all fighters follow me.Lando Calrissian, leading Gold Wing and others in an attack on the Death Star

Gold Wing was the call sign of a member of Gold Squadron, a Rebel Alliance starfighter squadron, during the Battle of Endor in 4 ABY. Gold Wing was one of many pilots who followed Gold Leader Lando Calrissian, flying the light freighter Millennium Falcon, into the superstructure of the incomplete second Death Star near the climax of the battle. The pilot remained with Calrissian and Red Leader Wedge Antilles as they approached the battlestation's reactor core, but Gold Wing was shot down by an Imperial TIE fighter before they could reach their target.

Though the term "Gold Wing" could refer to the Rebel Alliance's Gold Squadron,[2] the designation was also the call sign of an individual pilot who served with the squadron.[1] In 4 ABY, after learning that the Galactic Empire was constructing a second Death Star in the Endor system, the Rebel Alliance decided to launch an attack on the incomplete battlestation. A commando team was dispatched to the Forest Moon of Endor to destroy the shield generator protecting the Death Star; with the deflector shield out of the way, the Alliance Fleet, under the command of Mon Calamari Admiral Ackbar, could arrive in-system to destroy the station. However, the Alliance had fallen into a trap orchestrated by Emperor Palpatine; when the Alliance Fleet arrived, they were trapped between an Imperial fleet and a shielded and operational Death Star. As the battle raged between the opposing armadas, the strike team succeeded in destroying the shield generator, leaving the Death Star vulnerable to attack.[3]

General Lando Calrissian, flying the freighter Millennium Falcon as Gold Leader, used the opportunity to lead several Rebel starfighters—including Gold Wing—into the battlestation's superstructure to destroy the Death Star's main reactor. Racing through the battlestation's interior, the Rebels contended with numerous obstacles and pursuing Imperial TIE fighters. Several Alliance starfighters broke off and doubled back to the Death Star's surface, luring away some of the TIE fighters and leaving Calrissian, Red Leader Wedge Antilles, and Gold Wing to destroy the reactor. Gold Wing fell in behind the other two as the trio of ships homed in on their target, but this move left the pilot vulnerable—Gold Wing was shot down by one of the remaining Imperials. Calrissian and Antilles managed to take out the main reactor, creating a chain reaction that destroyed the Death Star.[1]

A Rebel pilot, Gold Wing served under General Lando Calrissian at the Battle of Endor. The pilot followed Calrissian and Wedge Antilles into the second Death Star, and was skilled enough to navigate through the hazardous superstructure, only to be shot down by an Imperial TIE fighter before reaching the main reactor.[1]

The unidentified pilot known only as "Gold Wing" briefly appeared in the 1983 novelization of Star Wars: Episode VI Return of the Jedi. Gold Wing is merely a background character in the novel, lacking any dialogue. Unlike the other pilots bearing a "Wing" designation in the novel, Gold Wing has not been mentioned in any source, nor has the pilot's gender been established. 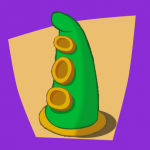