Heroes of the Resistance Expansion Pack

The Guns for Hire Expansion Pack is a supplement to the Star Wars: X-Wing Miniatures Game from Fantasy Flight Games. The expansion features detailed miniatures of a Kihraxz assault fighter and a StarViper Mk. II. It was released on October 26, 2017 as part of the game's Aces wave of expansions.

The Scum and Villainy aces expansion for X-Wing™, Guns for Hire adds tremendous versatility to the faction's Kihraxz fighters and StarVipers. Both are represented by miniatures with eye-catching alternative paint schemes, and you'll find a handful of ambitious new pilots eager to fly them, as well as two new Titles and other upgrades with which you can get them combat-ready. Altogether, the expansion comes with two starfighter miniatures, eight ship cards, twelve upgrades, and four condition cards, plus all the maneuver dials, bases, and tokens you need to send your hired guns to battle!

The Guns for Hire Expansion Pack contains two miniatures, plus two maneuver dials and action tokens, as well as pilot and upgrade cards. 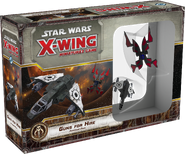 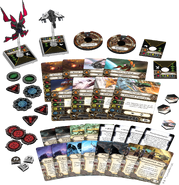