Finn & Rey Escape!
Han & Chewie Return! is a storybook by Michael Siglain published by Disney–Lucasfilm Press that adapts scenes from Star Wars: Episode VII The Force Awakens. The eight-by-eight inch book was published on December 18, 2015, comprises 32 pages, and is intended for children ages six through eight.[3][5]

Everyone's favorite smugglers are back! Han Solo and Chewbacca return in a heroic new adventure set in a galaxy far, far away.[5]

As the Millennium Falcon flies through space, danger approaches. A large vessel, the Eravana, appears and swallows the ship. Inside the Falcon, three individuals, a human scavenger named Rey, a former First Order stormtrooper named Finn and a droid called BB-8 hide. However, they are discovered by two individuals that board the vessel, the human Han Solo and the Wookiee Chewbacca. Han Solo asks where they got the vessel and Rey explains that they had found it on the planet Jakku, that it had been stolen several times. Solo replies that, "Well, Han Solo just stole back the Millennium Falcon for good!"[6]

Rey immediately recognizes Solo's name as that of a general who was legendary in the Rebel Alliance. Solo, however, is no longer a part of that Alliance, or even the Resistance against the First Order. He wants the group off his ship, but Rey pleads that the droid BB-8 is carrying important information about the Jedi Knight Luke Skywalker. Before they can converse further, they hear a noise, which Solo and Chewbacca leave to investigate, ordering the others to stay put.[6]

Solo and Chewbacca find themselves surrounded by individuals from two gangs, the Guavian Death Gang and the Kanjiklub, both of which have come to collect money that Solo owes them. Rey and Finn decide that they have to help. They hatch a daring plan to trap the two gangs, but instead accidentally release the Eravana's dangerous cargo, vicious tentacled creatures known as rathtars. This ends up working to the group's advantage, as the rathtars attack several of the members of the Guavian Death Gang and give Solo and Chewbacca the chance to fight off the Kanjiklub.[6]

Things take an unfortunate turn, however, when one of the rathtars grabs Finn and carries him away. Rey, however, manages to free him by closing a blast door on the tentacle that is holding Finn, freeing him. Meanwhile, Chewbacca is hit on the shoulder by one of the Kanjiklub, but Solo uses Chewbacca's bowcaster to fend off further attacks. The entire group escapes to the Falcon, but with Chewbacca hurt, Rey takes over as Solo's copilot. She and Finn explain that BB-8 is carrying important information that could prove vital to stopping the First Order. Solo isn't sure that he wants to go back to fighting for others, but in the end decides to help.[6] 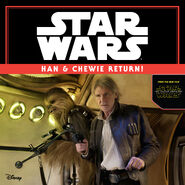 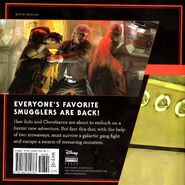