Han and the Rebel Rescue

Han and the Rebel Rescue is a Star Wars young readers book with stickers released by Disney–Lucasfilm Press on May 2, 2017.[2] It is an adaptation of Smuggler's Run: A Han Solo & Chewbacca Adventure. The story was later republished as part of the young-reader story collection Galactic Adventures Storybook Collection on October 2, 2018.[4]

Featuring Han Solo and Chewbacca, and set between A New Hope and The Empire Strikes Back, Star Wars fans new and old will love this 8x8 storybook with stickers.[2] 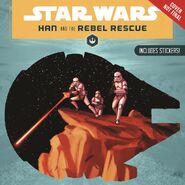 In other languages
Retrieved from "https://starwars.fandom.com/wiki/Han_and_the_Rebel_Rescue?oldid=9275029"
Community content is available under CC-BY-SA unless otherwise noted.