Heroes of the Resistance
Expansion Pack

The Heroes of the Resistance Expansion Pack is a supplement to the Star Wars: X-Wing Miniatures Game from Fantasy Flight Games. The expansion features detailed miniatures of the Millennium Falcon and Resistance pilot Poe Dameron's T-70 X-wing starfighter, Black One, as seen in the film Star Wars: The Force Awakens. It was released on October 27, 2016 as part of the game's Aces wave of expansions.

Rey, Finn, Poe Dameron, and the heroes of The Force Awakens fight for freedom with the Heroes of the Resistance Expansion Pack for X-Wing™. Featuring new sculpts for the Millennium Falcon and Poe Dameron's black-and-orange T-70 X-wing, Heroes of the Resistance also expands your fleet with three unique X-wing pilots, as well as new versions of Han Solo and Chewbacca. Meanwhile, the pack's eighteen upgrades introduce new elite pilot talents, Tech upgrades, and unique Title upgrades for both the Millennium Falcon and Black One.

The Heroes of the Resistance Expansion Pack contains two miniatures, plus two maneuver dials and action tokens, as well as pilot and upgrade cards. 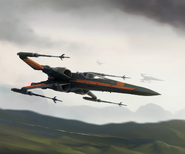 Retrieved from "https://starwars.fandom.com/wiki/Heroes_of_the_Resistance_Expansion_Pack?oldid=8733120"
Community content is available under CC-BY-SA unless otherwise noted.