All over the galaxy

Imperial Army troopers were the standard infantry of the Imperial Army and the most common soldiers of the Galactic Empire on most subject worlds. Following the Empire's post-Endor fragmentation, their numbers were maintained by periodic conscription of subject populations.

Imperial Army troopers were recruited from all across the Empire, though preferably from worlds which lacked any rebel sympathies. Those who passed their initial screening at their local Imperial Recruitment Office and the medical and intelligence assessments at a Training Center were shipped to one of the thousands of drop camps situated across the Empire for basic training. Physical fitness, equipment maintenance, team-building drills, and indoctrination were all part of training to become an Army trooper. Though survival in a variety of environments was standard, some drop camps specialized in certain exotic types as well. All manner of combat techniques were taught, from hand-to-hand fighting and blaster proficiency to grenade and heavy weapons training.[1]

Troopers fresh out of training were reasonably professional soldiers, though lacking in experience and, among those who were conscripted, generally low morale. While capable of facing regular Rebel troopers in combat, they were easy prey for the Alliance's SpecForce. Those who managed to survive a few tours of duty, mostly career soldiers, were able to hone their skills to a greater degree and likewise possessed superior morale and confidence in their abilities. Such veteran troopers were a fairly significant threat even to SpecForce. The most elite of the Army were Imperial Army Special Missions trooper.[2]

However, military duty for an Army trooper was relatively light: whereas the Stormtrooper Corps—which was separate from the Imperial Army—was employed for boarding actions and attacking enemy positions, regular army troopers were used to secure ground already taken. They also maintained Imperial military bases or served aboard fleet vessels as marines, and garrisoned pacified worlds.[3] Troopers were more than willing to fight when necessary though; thirty troopers participated in an attack against a group of smugglers in the Whistler's Whirlpool Tapcafe on Trogan in 9 ABY.[4]

At some point in the history of the Fel Empire, the Stormtrooper Corps was disbanded and the stormtroopers were redistributed into the ranks of the Imperial Army. Yet individual stormtrooper units continued to operate separately from army troopers as elite shock forces, and thus they retained their armor as well.[5] 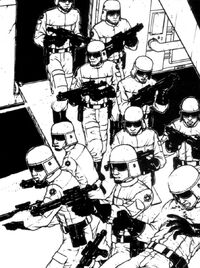 During the early years of the Empire, troopers wore a similar uniform as Imperial Navy troopers, though it was grey-colored, along with partial field armor and a blast helmet with integrated comlink like the DH77 headcomm. Standard gear consisted of a blaster rifle, usually an E-11 blaster rifle and grenades along with survival gear and a utility belt containing supplies.[1][2] Goggles were also worn, with a variety of tinted and vision-enhancing models in use by the army.[6] Troopers could be equipped or operated as part of the crew for an infantry support weapon, including light repeating blasters, Equalizer ion cannons, PLX-2M portable missile launchers, DEMP guns, CSPL-12 projectile launchers, or E-Web heavy repeating blasters.[1] They also had similarities in uniform to the Vehicle Command Crewers, more specifically the Armored Cavalry Division.

An Imperial officer in field armor with shoulder pads.

A stormtrooper, an elite shock trooper of the Imperial Army around 130 ABY.

In the 2003 video game Star Wars Galaxies: An Empire Divided, certain Imperial non-player characters were identified as Imperial troopers, and wore white jumpsuits, with a white belt, boots, and gloves. Given that these Imperial troopers acted as soldiers who patrolled Imperial bases on various worlds, it can be deduced that these were simply Imperial Army troopers wearing a different type of uniform.

Despite them being the most numerous of the Empires soldiers, they are rarely seen in any Star Wars media. This can be seen as mostly coming from the fact that the Imperial Army Troopers are primarily a garrison force securing planets far away from frontlines where combat is uncommon and thus the superior training of the Stormtroopers would be wasted, while most of Star Wars media is set closer to the frontlines, where Stormtroopers are more common.