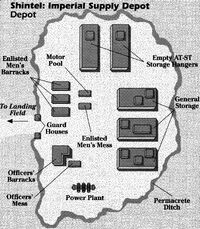 Imperial Depot 4290-1 was established by Moff Kentor Sarne on the planet Shintel as part of his plan to set up a series of supply depots across the Kathol sector. In 8 ABY, the depot was commanded by Colonel Heget. 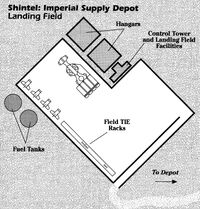 Imperial Depot 4290-1 was built in the northwestern hemisphere, and housed around 1,500 men who served in ordnance and supply units. It was built at the foot of a mountain range on bedrock, and was surrounded by marshland.

The standard complement of the base was 1,500 personnel, but when Sarne stranded some of his least loyal troops there, the contingent was increased to 2,000. The depot had only five old TIE/LN starfighters and four cargo shuttles available to it.

Following the Battle of Kal'Shebbol, Sarne's fleet arrived at Shintel and the depot to pick up the arsenal supplies stored there. Sarne also took the opportunity to alter the back-ups of his navigational data that he kept at the base. Finally, he performed the last purge of his forces at the depot by picking up those personnel that were loyal to him, and leaving behind those that were more loyal to the Empire.

Sarne never intended to return to Shintel, but realized that he might need the base one day. He ordered his men to secretly sabotage the hyperdrive engines on all hyperspace capable craft at the base. Sarne left orders for the personnel to hold the depot and construct a new landing field designed to house blastboats. As a last act, he blockaded the planet using Merr-Sonn Mark III Defender ion mines.

After discovering what Sarne had done, the base fell into two camps. One faction, led by Colonel Heget, saw the actions for what they were — treachery. Heget was intent on re-establishing communications with the galaxy, particularly Imperial High Command. They concerned themselves with trying to repair the hyperdrives on the cargo shuttles. The other faction, led by Major Danthe, held that Sarne would return, and that his actions were part of a grand plan to ensure the depot's secrecy and security. Danthe's faction were intent on completing the task of building the new landing field as per Sarne's orders.

However, a third faction was operating, lead by Lieutenant Palme. Palme, an agent of Sarne's, had been entrusted with uploading doctoring navigational documents to the FarStar. He also commanded a squad of four men who were extremely loyal to Sarne, and were members of his personality cult. These men were active within both camps, and had scuppered at least one effort to repair one of the shuttles.

A week after Sarne left, the New Republic CR90 corvette FarStar arrived at Shintel. They managed to clear a path through the minefield orbiting the planet, then land on the planet. Captain Kaiya Adrimetrum met with Colonel Heget and agreed a deal — the FarStar would transport Heget and an aide to Tanquilla Beach to file a report with Imperial authorities. In return, Heget would supply the FarStar with navigational data and information regarding Sarne's probable destination.

While preparing to leave, Lieutenant Palme offered a set of navigational data to the crew of the FarStar, while his agents infiltrated the ship and attempted to steal a hyperdrive motivator from one of the X-wings onboard. The datacard contained a virus program designed to trigger a hyperdrive failure the next time the FarStar's hyperdrive engines were engaged, while his agent's attempt to steal hyperdrive parts was meant to cast doubt on Heget.

Soon after the attempt on the X-wing's hyperspace motivator, the FarStar left the planet, bound for Tanquilla Beach. However, Sarne's virus stranded the FarStar in orbit, and the ship was attacked by Qulok's Fist. Heget, intent on his own priorities, ordered his remaining TIE fighters into battle to assist the FarStar.

Retrieved from "https://starwars.fandom.com/wiki/Imperial_Depot_4290-1?oldid=8315288"
Community content is available under CC-BY-SA unless otherwise noted.