The Galactic Civil War... now, that's history for you. Throughout the galaxy, you'll find many pockets of strife pertaining to this ongoing phenomenon. On Naboo, I was able to find this one. I was amazed to find it still crawling with inhabitants and my surprise was what nearly gave me away to the Alliance.Excerpt from Tinrilo x'Rilsam's log

An Imperial outpost was located in the Gallo Mountains, on the planet Naboo, during the Galactic Civil War. Early during the conflict, Rebel forces attacked the outpost and overwhelmed the Imperial troops stationed there. After the attack, the corpses of the Imperial defenders were abandoned to decomposition. By the time of the Battle of Yavin, the explorer Tinrilo x'Rilsam, discovered the outpost while exploring Naboo. The adventurer noticed a large amount of skeletons but his exploration was stopped by the arrival of Rebel troopers who were still patrolling the area, forcing him to flee quickly.[2]

The Imperial outpost was a location in the 2003 video game Star Wars Galaxies, a massively multiplayer online role-playing game developed by Sony Online Entertainment and published by LucasArts,[1] prior to its closure on December 15, 2011.[3] The Imperial outpost was one of many unmarked points of interests on the planet Naboo.[1] Following the release of the Star Wars Galaxies: Jump to Lightspeed expansion pack in 2004, rare data storage unit devices could sometimes be looted during space battles. One such data storage item, named "an Explorer's Log (2/8)," contained a detailed backstory for the outpost.[2] 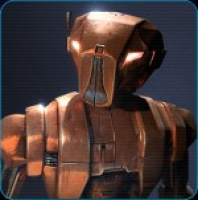