The Interdictor Expansion Pack is a supplement to the tactical naval warfare game, Star Wars: Armada, published by Fantasy Flight Games, as part of its fourth wave. The expansion features a detailed miniature of the Interdictor-class Star Destroyer, as well as maneuver dials, action tokens, two ship cards, and fourteen upgrade cards. It was announced on May 20, 2016, alongside the Liberty Expansion Pack,[2] and was released in August, 2016.[1]

The Interdictor cruiser was designed a major part of the Empire's response to the elusive Rebel threat. Its gravity-well projectors are capable of wrenching enemy ships out from hyperspace, and its deployment along one of the galaxy's hyperspace lanes can spell doom for unsuspecting Rebel captains.

The Interdictor Expansion Pack contains one miniature, a stand, numerous dials and tokens, as well as ship and upgrade cards. 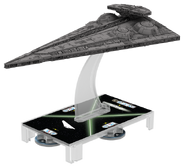 Cover art
Add a photo to this gallery

Retrieved from "https://starwars.fandom.com/wiki/Interdictor_Expansion_Pack?oldid=9289902"
Community content is available under CC-BY-SA unless otherwise noted.