Wookieepedia
Register
Don't have an account?
Sign In
Advertisement
in: Real-world articles, Wizards of the Coast sourcebooks

Wizards of the Coast

978-0786951833
The Jedi Academy Training Manual is a sourcebook for the Wizards of the Coast Star Wars Roleplaying Game Saga Edition Core Rulebook released on May 19, 2009. Portions of the book are written from an in-universe perspective, assuming the reader is a student of the Ossus Jedi Academy in the years prior to the Sith–Imperial War.

"Mind what you have learned. Save you, it can."
―Yoda[src]

Students come from all corners of the galaxy to study the ways of the Jedi. Under the guidance of talented Jedi Masters, these students gain knowledge of the Force and become the guardians of peace and justice. Yet the power of the dark side is ever-present, tempting reckless students to walk the path of evil. Your destiny is in your hands. Will you grow to become a powerful Jedi Knight, or succumb to the lure of the dark side?

THE JEDI ACADEMY TRAINING MANUAL PRESENTS A VARIETY OF OPTIONS FOR BOTH PLAYERS AND GAMEMASTERS, INCLUDING:

*New talents, Force powers, and other options for Force-using heroes.

*Information on famous Jedi and dangerous villains that threaten the Jedi Order.

Star Wars Roleplaying Games - Jedi Academy Training Manual, the ultimate guide to Jedi secrets from all eras of the Star Wars saga. Delve into the world of the Jedi, from the earliest days of the Old Republic and the Dark Times, to fall of the Galactic Empire and the reemergence of the Jedi Order. Never before has there been a more exciting Jedi Manual for the ultimate Star Wars fan! 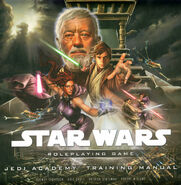 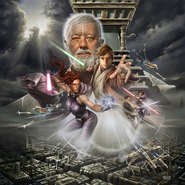