Jedi Apprentice: The Fight for Truth

The Fight for Truth

The Day of Reckoning[5]

"A summons we have received. Parents have contacted the Jedi. Think they do that their child might be Force-sensitive. Kegan, the planet is."
―Yoda[src]

The Fight for Truth by Jude Watson is the ninth in a series of young reader novels called Jedi Apprentice. All the books in the series are written by Jude Watson, except for the first book, The Rising Force, which was written by Dave Wolverton. The series explores the adventures of Qui-Gon Jinn and Obi-Wan Kenobi prior to Star Wars: Episode I The Phantom Menace.

Peace over anger.
Honor over hate.
Strength over fear.

Most people on the planet Kegan don't want to have anything to do with the rest of the galaxy. But when a young potential Jedi is discovered there, Qui-Gon Jinn, Adi Gallia, and their apprentices, Obi-Wan and Siri, are compelled to visit this strangely isolated world.

They are not welcomed with open arms. Instead, Qui-Gon and Adi find themselves caught in a web of deception while Obi-Wan and Siri are imprisoned in a school where thought is dictated, dissent is forbidden, and detention is permanent.

On this planet, the Jedi must fight for truth…even though nobody wants to face it.

"Siri has her own strengths and weaknesses. That was for you to discover. You merge with the strength, cover the weakness. Together, the two of you are stronger."
―Qui-Gon Jinn, reprimanding Obi-Wan Kenobi after the training exercise[src]

In a Jedi Temple training room, Padawans Obi-Wan Kenobi and Siri Tachi participate in a training exercise under the supervision of their respective Masters, Qui-Gon Jinn and Adi Gallia. The two young apprentices are supposed to cooperate in destroying a number of seeker droids, merging their styles with the Force to cover each other's weaknesses and fight as one. Tachi, however, gives her full attention to simply destroying the droids, and Kenobi, attempting to penetrate her devotion, inadvertantly collides with her. Gallia orders both Padawans to opposite corners of the room to start over, and Kenobi gives up trying to work together with Tachi. Minutes later, they have taken out every droid in the room, but Jinn informs them that both have failed, for they fought separately and not together. Grand Master Yoda then enters the room with a mission: both Padawans and their Masters are to travel to the remote Outer Rim planet of Kegan, from where parents have contacted the Jedi believing that their daughter may be Force-sensitive. Yoda points out that Kegan has been completely isolated from the rest of the galaxy for thirty years, and he asks the four Jedi to open relations between Kegan and the Galactic Republic also.

"Let us sit down. While the child is feeding, we can explain more about why we have come so far to see her."
―Adi Gallia[src]

As the four Jedi arrive on Kegan, Kenobi wonders why two Master–Padawan teams have been sent on what seems to be a routine mission. The Padawan considers the possibility that the Jedi Council is still keeping an eye on him since he had left the Jedi Order for a brief time several months prior, despite the fact that he has been accepted back into the Order and his probation has been lifted. Meanwhile, Tachi, who is two years younger than Kenobi and far less experienced, is looking outside the ship at the landing platform. Kenobi tries to give her some advice, but she rebukes him, reminding him of his temporary departure from the Order. Soon, the ship lands, and the Jedi disembark. They are immediately met by Hospitality Guides O-Rina and V-Haad and the parents who contacted the Jedi, V-Nen and O-Melie. The Guides take the entire group to the parents' home to meet the child, explaining the way of life on Kegan while en route. Arriving, the Jedi indicate that they wish to meet with the parents privately, but the Guides politely refuse, claiming that V-Nen and O-Melie are nervous and had requested that the Guides stay. Jinn points out that there is nothing to be nervous about, but the parents state their wish that the Guides stay. V-Haad and O-Rina reassure the Jedi that it is all right for them to stay, but Kenobi senses that something is wrong and that the Guides, despite their smiles, did not want the Jedi to come here at all.

Jinn senses it also but, along with Gallia, agrees to let the Hospitality Guides stay, and the group goes inside. V-Nen and O-Melie present their daughter, O-Lana, to Jinn, who studies her for a few minutes. Jinn and Gallia both determine that she is indeed Force-sensitive, and Jinn hands the child—who is also hungry—back so she can be fed by the child caregiver for the housing quad, O-Yani. The Jedi Masters try to explain to the parents how a Force-sensitive child can be different from a normal child and why it would be a good idea for O-Lana to be given to the Jedi Order for training, but the Guides constantly interrupt, saying how keeping her on Kegan is better without actually listening to the Jedi or giving the parents a chance to speak. Finally, the Guides end the meeting, telling the Jedi that they will transport them to their quarters. Jinn, however, requests that they walk there instead, and the Guides reluctantly agree. Jinn quietly tells Kenobi and Tachi to split from the group without being seen during the walk and gather information about the planet, then turns to Gallia to see if she will object. Waiting, Jinn also wonders why two teams were sent on the mission and considers a couple of possibilities, including that Gallia might be intended to monitor his tendency to bend the rules. Shortly, Gallia agrees to the plan.

As the group (including V-Nen and O-Melie) makes its way through the city, Jinn asks the Guides why Kegan has isolated itself for so long. The Guides respond by claiming that the galaxy is dangerous and that the sharing of knowledge and goods between and travel to other planets would harm the "General Good," a Kegan philosophy regarding the well-being of their community. As the group walks through the marketplace, Jinn creates a diversion by "accidentally" bumping into a rack of tools, causing it to spill. While helping pick the tools up, the two Padawans slip away. Their absence is soon noticed by the Hospitality Guides, who tells Gallia and Jinn to wait in the market with V-Nen and O-Melie while they search for Kenobi and Tachi. After the Guides leave, Jinn tries to initiate a conversation with the parents, but O-Melie flatly tells him that they made a mistake in contacting the Order and that the Jedi should leave. Sensing that the parents are afraid, Jinn suggests that they go back to their house and look at O-Lana again; the parents agree when he adds that the Jedi would take full responsibility for violating the Guides' instructions. Taking the long way to avoid the Guides, the four soon arrive back at the parent's house and are greeted by O-Yani. O-Melie asks her where O-Lana is, and O-Yani tells them, "They took her away."

Meanwhile, the Padawans leave the marketplace and head for the Garden Circle to avoid detection. Tachi complains about not being able to watch the Masters and learn from them. When Kenobi tries to comfort her with Jedi wisdom, Tachi rebukes him, reminding him that she took the same classes at the Temple that he did. Kenobi proposes that they find the Tech Circle to begin investigating Kegan society, but Tachi suggests that they mingle with the population and gather information by talking to people, pointing out that they would blend in easily because of their similar clothes. Just then, a landspeeder pulls up to them, and a Truant Guide asks them why they aren't in school. Bluffing, Tachi tells him that their parents needed their help at home that day, and the Guide initially appears to be satisfied. As the two Padawans move on, however, the Guide hits first Kenobi, then Tachi, with an electro-jabber, sending them to the ground. The Guide dumps them on the landspeeder's floor and takes off.

This is a gallery of the different cover variations of Jedi Apprentice: The Fight for Truth. 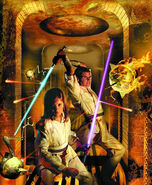