The Trail of the Jedi

The Master of Disguise

Jedi Quest: The Dangerous Games is the third in a series of young reader novels that chronicle the adventures of Obi-Wan Kenobi and Anakin Skywalker between Star Wars: Episode I The Phantom Menace and Star Wars: Episode II Attack of the Clones. Narration for the audio version was performed by Jonathan Davis.

When Obi-Wan Kenobi and Anakin Skywalker are sent to the Galactic Games, they are meant to be keepers of the peace. Then they discover an illegal event that Anakin knows all too well: Podracing. Even though Obi-Wan forbids it, Anakin cannot resist the thrill of the race—and the chance to face off against his childhood rival, the loathsome Sebulba.

As a Jedi, Anakin is supposed to let go of his past. But his past will not let go of him. 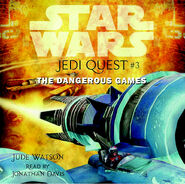 Japanese cover
Add a photo to this gallery

In other languages
Retrieved from "https://starwars.fandom.com/wiki/Jedi_Quest:_The_Dangerous_Games?oldid=9018266"
Community content is available under CC-BY-SA unless otherwise noted.