As the war between the Republic and the scattered remnants of the Empire continues, two children—the Jedi twins—will come into their powers in a universe on the brink of vast changes and challenges. In this time of turmoil and discovery, an extraordinary new Star Wars saga begins…

While Luke Skywalker takes the first step toward setting up an academy to train a new order of Jedi Knights, Han Solo and Chewbacca are taken prisoner on the planet Kessel and forced to work in the fathomless depths of a spice mine.

But when Han and Chewie break away, they flee desperately to a secret Imperial research laboratory surrounded by a cluster of black holes—and go from one danger to a far greater one…

On Kessel, Luke picks up the trail of his two friends, only to come face-to-face with a weapon so awesome, it can wipe out an entire solar system. It is a death ship called the Sun Crusher, invented by a reclusive genius and piloted by none other than Han himself…

Han Solo and Chewbacca travel to Kessel as representatives of the New Republic, but are attacked and imprisoned by the ragtag forces of Moruth Doole. Doole fought for and won control of the spice mining planet and its prison facilities after the fall of the Galactic Empire, and holds a grudge against Solo from their smuggling days. Han and Chewbacca are forced to mine luminous glitterstim in the underground darkness where it grows.

On Coruscant, Luke Skywalker is given governmental permission and resources to search for any Force-sensitive individuals that may be left scattered across the galaxy, in hopes of founding a new Jedi academy. He eventually finds Gantoris on Eol Sha and Streen on Bespin. Lando Calrissian's search of another lead on Umgul does not pan out, but does lead to an unexpected and much-needed financial payoff.

Leia Organa Solo tries to balance her governmental duties with the return of her two older children, the toddlers Jaina Solo and Jacen Solo, from protective hiding. Han's disappearance weighs heavily on her mind, although he and Chewbacca manage to escape with fellow slave Kyp Durron, only to stumble on Maw Installation, a secret, hidden Imperial military research-and-development facility home to a Death Star prototype. Its residents are waiting in vain for Grand Moff Tarkin to send orders to deploy the deadly Sun Crusher.

Han convinces scientist Qwi Xux of the evil her creations are used for, causing her to help steal the Sun Crusher and defect with the escaped prisoners. Kyp uses his latent Force abilities to guide the ship around a maze of black holes where they run into the recaptured Millennium Falcon, piloted by Luke and Lando. The pursuing fleets of Kessel and Maw Installation are left to battle each other.

Meanwhile, Leia and Mon Mothma select the moon Yavin 4 as the location for a new Jedi academy. Luke is pleased with the selection, and invites Kyp Durron to join in future training.

Han tells Kyp that he and Leia met Vima-Da-Boda on Nal Hutta. However, in Dark Empire, they met her on Nal Hutta's moon, Nar Shaddaa.

Daala has Grand Moff on her chest insignia in the cover art, despite her admiral rank and insignia referenced in the text. 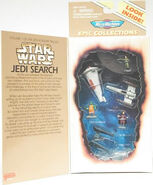 Epic Collections - Micro Machines
Add a photo to this gallery

In other languages
Retrieved from "https://starwars.fandom.com/wiki/Jedi_Search?oldid=9718905"
Community content is available under CC-BY-SA unless otherwise noted.