Wookieepedia
Register
Don't have an account?
Sign In
Advertisement
in: Real-world articles, Super-semi-protected pages, Wookieepedia in other languages

View source
watch 01:55
Cobra Kai Season 4 - The Loop
Do you like this video?
Play Sound

Jedipedia is a Star Wars online wiki-encyclopedia in German language based on MediaWiki. Within one year from its founding on October 16th 2005, it became the second largest Star Wars wiki project after Wookieepedia. In June 2011, the site was divided by the decision of its original founder to move to Wikia while nearly the whole community decided to stay independent at the new domain Jedipedia.net.

Jedipedia was founded on October 16th, 2005 by Premia, the forum admin of Star Wars Chroniken, a German Star Wars fan portal. The project was launched with five initial articles, Naboo, George Lucas, Humans, Wookiees and Tusken. Originally just named "Deutsches Star Wars-Wiki" ("German Star Wars Wiki"), it was first hosted on the server of starwars-chroniken.de and shared traffic and webspace with that site. Searching for a more representative and catchy name, suggestions were made including Wookieepedia, Naboopedia, Banthapedia, but in the end "Jedipedia" was chosen by the then still rather small community.

On May 26, 2006, Jedipedia became an official partner of Wookieepedia, which includes the exchange of inter-language links and cross-promotion. A month later, Jedipedia celebrated its 500th article. Since then, the community grew rapidly and a small but diligent base of authors provided for a steady increase of articles. On account of this, Jedipedia was able to celebrate its 1000th article in August 2006 and its 1500th article just three months later. The increasing traffic and rapid growth forced Jedipedia to leave the starwars-chroniken.de server and to move to a new server. In addition, the necessity to include Google advertisements into Jedipedia arose to bear the costs caused by the larger webspace and increasing amount of traffic. In order to deal with the increasing work and massive vandalism attacks, especially the infamous "on wheels" vandalism, two more admins were promoted by the initial team. On December 1st, 2006, the main page and Community portal underwent a major redesign introducing several new features, such as a graphical header, image buttons for all six Star Wars movies and "Quote of the Week" and "Article of the month" sections, starting with Jango Fett, as chosen by the community. In the following years, the Jedipedia grew rapidly in terms of articles, users and hits. To ensure a better cooperation and communication between the wiki's users, an IRC channel was set up in the GameSurge IRC network. Starting with Jedipedia's second anniversary on October 16th, 2007 a big milestone was reached with every following anniversary (2007: 6,000 articles; 2008: 10,000 articles; 2009: 15,000 articles; 2010: 20,000 articles).

In addition to Jedipedia's further development in the World Wide Web, the admin team also decided to participate more actively in the German fan community by setting up booths at both Jedi-Cons in 2008 and 2010, gaining official recognition by Lucasfilm fan ambassador Stephen J. Sansweet and the friendship of some actors and artists such as Matthew Wood, Femi Taylor, Richard LeParmentier, Randy Martinez and Denise Vasquez. In June 2011, webmaster Premia decided to move Jedipedia to Wikia, a step the admin team had not agreed to on their disclosed forum before. After learning about this decision, some users put a community vote into motion to stop this decision which was signed by more than 40 then active users. Their main concern was the possible exploitation of the wiki by a company like Wikia and the lack of independence for the community. One week later, the remaining administrators opened a new website at Jedipedia.net, copying the old articles by maintaining the GNU license and taking over the user database by the use of a MediaWiki extension. More than one hundred new articles were written on the first day after the restart at the new domain. In the following weeks, Jedipedia.net presented the new Vector skin and opened a new search portal. Promoting four new admins to establish a new structure of the administrative system, the new Jedipedia searched for new affiliates in the German fan community, companies selling Star Wars merchandise and Star Wars book publishers. One of the most important achievements of Jedipedia.net is the cooperation with the official German Star Wars Fan Club and an article in their club magazine, which is the German version of the Star Wars Insider for the most part. In September 2011, Jedipedia.net counted more than 24,000 articles, surpassing de.jedipedia.wikia.com, the Wikia version with less activity and users, by more than 2,000 articles.

In August 2011 a registered voluntary association with the name Jedipedia e.V. was founded by seven of the wiki's users to provide financial and legal protection for the website and furthermore an authority to prevent efforts of single community members regarding Jedipedia's fate such as the move to Wikia. In order to further the connection with the German fanbase and in line with the association's goals, the team of Jedipedia.net was present at the Noris Force Con 2011, a Star Wars charity convention for the German children cancer foundation. At its booth the team presented the wiki project and contributed to the collection of more than Euro 11,000 for the event's purpose with the help of several sponsors. 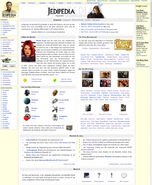