Lure of the Dark Side

Join Us or Die
Knowledge and Defense is the third Force pack of the Echoes of the Force Cycle in Star Wars: The Card Game, released on May 29, 2014.

Knowledge and Defense is the third Force Pack in the Echoes of the Force cycle, continuing the cycle's journey into the power and mystery of the Force. As the forces of the dark and light sides clash over the galaxy, you'll find new tricks alongside iconic ships and characters in this Force Pack. You'll find Kyle Katarn's starship, Moldy Crow, searching for the Valley of the Jedi, even as the Rebel Alliance makes a return to Hoth. The Scum and Villainy of the galaxy grow rich off of the slave trade, and a new darkness is rising on the planet Dromund Kaas under the leadership of the deadly Sith Prophetess, Sariss. Whichever factions you choose to support in the battle for the galaxy, you'll be sure to reap the benefits of devoting yourself to the Force. 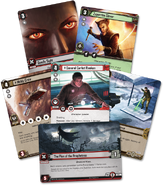