For a year Lando Calrissian and Vuffi Raa, his five-armed robot astrogator, had roamed space in the Millennium Falcon, seeking or creating opportunities to turn an easy, but not too dishonest, credit.

But now their partnership seemed doomed—for Lando's uncharacteristic impulse to help a race of persecuted aliens had suddenly made him and Vuffi vulnerable to several sets of their own enemies…not least of whom was the evil Rokur Gepta, the Sorcerer of Tund!

It has been nearly a year since Lando Calrissian and his droid companion, Vuffi Raa, ended their adventures in the Oseon system. They encounter Lehesu, a strange, vacuum-breathing creature, flying through deep space. In a short time, the intelligent manta-like creature and Vuffi Raa are able to establish a form of communication. The adventurers discover that the Oswaft live in a nebula called the ThonBoka ("Starcave" in common) with others of his kind, and that he, too, is on an adventure, having grown bored with the confines of his home. A month after parting ways, the pair receives word that the ThonBoka was besieged by the Centrality Navy. It seems Lehesu did not return directly to the Starcave, but explored more of the Centrality, making the Centrans nervous. In response, the navy trailed the giant Oswaft back to his home and set up a blockade at the entrance. At timed intervals, the Centrality cruisers unleash energies at the mouth of the Starcave, poisoning the interstellar plankton, pseudoanimals, and quasi-plants that make up the diet of the inhabitants. The Oswaft are slowly being starved. When Lando and Vuffi Raa hear this news, they hasten to the aid of their friend.

Lando Calrissian becomes apprehensive when he sees the size of the blockading fleet. Realizing that the Millennium Falcon is no match for that many warships, the pair utilize a scheme that Calrissian designed for tight situations. Posing as an interstellar salesman, Lando talks his way onboard the Respectable, the picket ship that halted them. Using his talent as a con-artiste, Calrissian works his way through the fleet, getting closer and closer to the entrance of the ThonBoka. While on their way to the fifth ship, the Courteous, the pair devise another plan. Straying from their trajectory and slowly moving toward the Starcave, the Falcon is cautioned to return to its original course. Calrissian ignores the communication and poweres up the aft deflector shields, just as the last warning is being transmitted. When the Couteous opens fire, Lando punches the hyperdrive engines while Vuffi Raa releases a canister of exploding gases and metallic particles, creating the illusion that the Millennium Falcon has been destroyed.

Meanwhile, the last Sorcerer of Tund, Rokur Gepta, is making an alliance with Klyn Shanga and his squadron of fighter pilots. They no longer have the means for interstellar travel, having lost their dreadnaught engine in the Battle of Oseon. Their starfighters are brought onboard the decommissioned cruiser Wennis, and the ship sets course for the ThonBoka. Gepta also contracts the services of the Ottdefa Osuno Whett to study the Oswaft and determine what they are and if they have any weaknesses.

The Millennium Falcon emerges from hyperspace inside the Starcave where Lehesu is waiting nervously. The three are enjoying each other's company, informing one another of their current situation, when two large Oswaft sent by the Elders summon them to the Cave of Elders. After introductions are made, a plan is to be formulated to deal with the blockading fleet. Concurrently, a delegation of Oswaft, led by Bhoggihalysahonues, is sent to the mouth of the nebula to try and negotiate a settlement without conflict. The Centrality cruiser Courteous is destroyed, along with many Oswaft. As the fighting ensues, word comes from Rokur Gepta, aboard the Wennis, to cease fire until he arrives.

The vacuum-breathers have the ability to project matter from their bodies, creating a false image of themselves in the process. They also can "hop," making short hyperspace jumps at will. Lando devises a stratagem that incorporates these talents. The Oswaft are to engage the enemy by flying between the cruisers, leave an image of themselves, and "hop" to another location. The Navy warships, thinking the enemy is near, will then fire on the artificial skin. The beams of their turbolasers will pass through the false image, striking the allied craft. This plan is put into effect when the Wennis arrives, bearing the symbol of the Central Administrator. Zero Squadron, led by Klyn Shanga, is simultaneously launched from the hangar of Gepta's cruiser. The starfighters are linked to the ship's pinnace to provide their hyperdrive capabilities. The motley array of fighters are to engage the Millennium Falcon inside the Starcave, while the Navy cruisers are occupied with the Oswaft at the mouth of the nebula.

As the battle rages on, many Navy ships are destroyed while the Millennium Falcon, with Vuffi Raa at the controls and Calrissian manning one of the quad-guns, is able to inflict damage to Zero Squadron. When the Falcon and the Renatasian pilots have fought their way to the entrance to the ThonBoka, Rokur Gepta calls a cease-fire to demonstrate the power of his new electromagnetic torpedo. Many Oswaft are killed, including the chief Elder and his second. Gepta has done this in an attempt to draw out Lando Calrissian and his droid and challenge them to a hand-to-hand duel to the death. Seeing no other option, Lando agrees to the contest. The terms of the fight are simple; each challenger is permitted a single weapon, and the match is to take place in space. The three met "outside," and as Lando and Vuffi Raa circle their opponent, the droid detaches his five appendages and uses them as a distraction for the gambler to employ his stingbeam.

When all eyes are occupied by the duel, the Zero Squadron pinnace startemoving toward the conflict. Klyn Shanga hails the ship, to find Osuno Whett at the controls. The Ottdefa states he wants to destroy the droid along with Calrissian, and perhaps Rokur Gepta as well. Remembering Whett's voice and seeing Vuffi Raa with his detached arms, Shanga realizes that Whett is the Butcher of Renatasia, not the droid. Shanga orders his men to fire on the pinnace, and they are able to force it into the Wennis, destroying both spacecraft. As Rokur Gepta is distracted by the explosion, Lando Calrissian fires on him, and his form dematerializes inside his spacesuit. When Calrissian searches the suit, he finds a Croke. He crushes it in his hand.

Directly after the death of Rokur Gepta, hundreds of thousands of mechanical life-forms appear, forcing an end to the hostilities. It appears their leader is the "father" of Vuffi Raa, and that many years ago, the little droid was sent out to record the experiences of other sentients. He is now being recalled to provide the information he collected. Lando Calrissian and Vuffi Raa are saddened by the parting, but Lando feels the need to settle down and become responsible, giving up his wandering ways. A hold full of valuable gemstones, provided by the Oswaft, will help get him started. 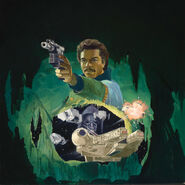