Legacies is a combination of two starter sets as well as booster packs set within the card and dice game Star Wars: Destiny. It was released on February 1, 2018.

The Star Wars universe is a galaxy of change. Fans have watched regimes rise and fall as the legacy of their favorite characters shift and change with the dramatic twists of the generation-spanning saga.

Legacies continues the evolution of Star Wars: Destiny, expanding on classic archetypes while introducing new mechanics, including a new die symbol and a new card type. As a new Base Set, Legacies looks to be a solid starting point for Destiny newcomers while introducing innovative new concepts.

Wookieepedia has 55 images related to Legacies. 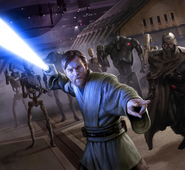 The Force Rend card from the set
Add a photo to this gallery
In other languages
Retrieved from "https://starwars.fandom.com/wiki/Legacies?oldid=8957673"
Community content is available under CC-BY-SA unless otherwise noted.