Wookieepedia
Register
Don't have an account?
Sign In
Advertisement
in: Real-world articles, Articles with an excess of redlinks, Star Wars: Legacy of the Force

Legacy of the Force: Inferno

For other uses, see Inferno.

Legacy of the Force: Inferno

Luke Skywalker wanted to unify the Jedi Order and bring peace to the universe. Instead, his wife, Mara, lies dead at the hands of an unknown assassin, his wayward nephew Jacen has seized control of the Galactic Alliance, and the galaxy has exploded in all-out civil war.

With Luke consumed with grief, Jacen Solo works quickly to consolidate his power and jumpstart his plan to take over the Jedi. Convinced he's the only one who can save the galaxy, Jacen will do whatever it takes, even ambush his own parents.

With the Rebel confederacy driving deep into the Core to attack Coruscant and the Jedi under siege, Luke must reassert his position. Only he can lead the Jedi through this crisis, but it means solving the toughest problem Luke's ever faced. Does he fight alongside his nephew Jacen, a tyrant who's taken over the GA or does he join the rebels to smash the Galactic Alliance he helped create?

The novel begins with Jacen Solo, now Darth Caedus, Dark Lord of the Sith, managing to affirm Tahiri Veila's allegiance to him by teaching her to flow-walk back in time. This is so that Tahiri can correct the mistake of not sharing a kiss with her late boyfriend, Anakin Solo, during the Mission to Myrkr during the Yuuzhan Vong War. The present Tahiri manages to push younger Tahiri into Anakin's embrace and they share a kiss, and this has Caedus and present Tahiri go back to the present so that they will not interfere with the time stream any further. Later, Caedus speaks to Tenel Ka Djo, his secret lover, who promises to lend him the Hapan Home Fleet for the upcoming Battle of Kuat if he amends his relationship with his uncle, Luke Skywalker. At Mara Jade Skywalker's funeral, Caedus sends GAG troops to arrest his parents due to their allegiance with the Confederation, as Leia was supposed to deliver Mara's eulogy. As Saba Sebatyne delivers the eulogy, none of the Jedi Masters suspects that Jacen is Mara's true killer, though they do look upon Jacen with scorn for his actions as of late. Caedus then resumes his position aboard the Anakin Solo, his personal Star Destroyer, above Balmorra during its battle. His cousin and apprentice, Ben Skywalker, contacts him to ask if he killed Mara. Caedus denies this and implies that Cal Omas is responsible. On Coruscant, Ben finds Omas, who is under house arrest after having been deposed of. Ben tells the former Chief of State that he truly believes that Jacen was behind Mara's death. Omas commits suicide by deliberately impaling himself on Ben's lightsaber so that Ben could have a reasonable excuse to return to Jacen, causing shock to an already grieving Luke and the other Masters. Luke, disapproving of Jacen's activities, refuses to help him at the Battle of Kuat. This causes Caedus to pull his forces out of the system to prevent a disastrous defeat that would endanger Tenel Ka.

In the meantime, Jaina Solo, Jagged Fel, and Zekk pursue Alema Rar, piloting the Sith Meditation Sphere known as Ship, to Ossus, as Luke has wrongly identified her as Mara's killer. The Twi'lek Dark Jedi escapes, and Caedus takes the Jedi Academy hostage, with Salle Serpa overseeing the occupation. Though many Jedi are killed and injured during the GAG takeover, Jaina and the others manage to defeat the enemy forces and reclaim control of the Academy. Meanwhile, Alema later arrives on Korriban after getting a belated message from the Home, where she finds the One Sith, who strongly disapprove of Caedus, and thus, refuse to help him.

Han Solo and Leia arrive on Kashyyyk to gain Wookiee support against Caedus, and Luke arrives, saying that he can no longer support Jacen and his rule of the Galactic Alliance. Soon after that, Caedus arrives into Kashyyyk's orbit and develops a sinister strategy: he uses his Star Destroyer's long-range turbolasers to bombard the planet's forests and cities in order to pull the Confederation navies away from the Core. Ben, who has been waiting patiently to strike against Caedus, chooses his time to attack. However, Lowbacca drops a shadow bomb on the Star Destroyer, putting an end to Ben's attack. Han truly believes that his son is dead, and Luke and Jaina lead a battalion of StealthX X-wing starfighters against Caedus's fleet. A shot from Jaina's fighter seemingly kills Luke.

On Hapes, Leia feels the shock from Luke's "death." She then duels Tahiri Veila, who attempts to arrest her and Han. Tenel Ka arrives to break the fight, and the Solos convince her to stop supporting Jacen. Simultaneously, Caedus tortures his cousin in a chamber of the Anakin Solo. Ben understands how Luke feigned his death and tells Caedus that he will soon arrive. Caedus refuses to believe this, but Luke immediately arrives and duels his deranged nephew. The duel harms them both, but Luke emerges as the victor after Ben frees himself from the Embrace of Pain and tosses a vibroblade in between Caedus's shoulder blades. But Ben wants to kill Caedus, and Luke refuses to let him do so, knowing that this could turn either of them to the dark side of the Force. The Skywalkers leave the ship, while a heavily injured Caedus limps to the infirmary for medical attention. He eventually resumes command just as the Hapan Home Fleet, commanded by Tenel Ka, arrives. Caedus initially thinks she is there to help him, only to learn that she has turned on him via a communication with her and his parents. He now feels utterly alone; however, he feels that all of the actions he commits are necessary sacrifices to keep peace and order in the galaxy, even though he is causing more harm than good. His fleet narrowly escapes thanks to some subtle Force manipulation from Caedus combined with Alema's help. This tricks the forces crucial to getting in Caedus's way to move for him as the Anakin Solo enters hyperspace and returns to Coruscant.

The novel ends with the warring factions holding a parlay aboard the Dragon Queen. The New Jedi Order declares that though they will not support the Confederation in the war, they will still act against the Galactic Alliance as long as Jacen is in control; the Hapes Consortium declares that it still supports the Alliance, but not Jacen; and the Confederation agrees to stay out of the Jedi's and Hapes Consortium's way. After the meeting concludes, Luke, severely injured from his duel with Caedus, gives Han and Leia a sympathetic look before returning to the infirmary to heal with Ben. Later, Han and Leia console each other aboard the Falcon, sadly knowing that they are now at war with the man who was once their son.

In a discussion between Alema Rar and the Sith on Korriban, the leader of the Sith enclave made references to the collective master of the Sith. He told Alema of how the Jedi-turned-Sith Vergere had been fascinated by the master's vision of "One Sith" as opposed to keeping to the tradition of the "Rule of Two." Legacy (2006) 18 confirms that this is Darth Krayt, making this the first time that events of the Legacy comics are referenced in the novels.

Jedi Master Saba Sebatyne was referred to as Grand Master alongside Luke Skywalker. 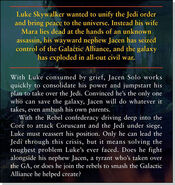 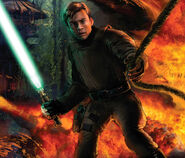