For other uses, see Sacrifice (disambiguation).

Legacy of the Force: Exile

Legacy of the Force: Inferno
Legacy of the Force: Sacrifice is a Star Wars Legends novel and the fifth volume in the Star Wars: Legacy of the Force series. It was written by Karen Traviss and first published by Del Rey in hardcover on May 29, 2007. The first paperback edition was released on April 29, 2008 and includes the novella Boba Fett: A Practical Man by Traviss.

To bring peace and order to a galaxy at war, Jacen Solo will sacrifice anything—or anyone. Now the moment of choice is at hand.

Civil war rages as the Galactic Alliance—led by Cal Omas and the Jedi forces of Luke Skywalker—battles a confederation of breakaway planets that rally to the side of rebellious Corellia. Suspected of involvement in an assassination plot against Queen Mother Tenel Ka of the Hapes Consortium, Han and Leia Solo are on the run, hunted by their own son, Jacen, whose increasingly authoritarian tactics as head of GA security have led Luke and Mara Skywalker to fear that their nephew may be treading perilously close to the dark side. But all Jacen wants is safety and stability for all—and he's prepared to do whatever it takes to achieve that goal.

But as his family sees in Jacen the chilling legacy of his Sith grandfather, Darth Vader, many of the frontline troops adore him, and countless citizens see him as a savior. The galaxy has been torn apart by too many wars. All Jacen wants is safety and stability for all–and he's prepared to do whatever it takes to achieve that goal.

To end the bloodshed and suffering, what sacrifice would be too great? That is the question tormenting Jacen. Already he has sacrificed much, embracing the pitiless teachings of Lumiya, the Dark Lady of the Sith, who has taught him that a strong will and noble purpose can hold the evil excesses of the dark side at bay, bringing peace and order to the galaxy–but at a price.

For there is one final test that Jacen must pass before he can gain the awesome power of a true Sith Lord: He must bring about the death of someone he values dearly. What troubles Jacen isn't whether he has the strength to commit murder. He has steeled himself for that, and worse if necessary. No, the question that troubles Jacen is who the sacrifice should be.

As the strands of destiny draw ever more tightly together in a galaxy-spanning web, the shocking conclusion will shatter two families... and cast a grim shadow over the future.

To bring peace and order to a galaxy at war, Jacen Solo will sacrifice anything-or anyone. Now the moment of choice is at hand.

Suspected of treason, Han and Leia Solo are on the run, hunted by none other than their own son, Jacen. But though his family sees in Jacen the chilling legacy of his Sith grandfather, Darth Vader, many of the frontline troops adore him, and countless citizens see him as a savior in a galaxy torn apart by too many wars. All Jacen wants is safety and stability for all-and he's prepared to do whatever it takes to achieve that goal... even if it means embracing the teachings of Lumiya, the Dark Lady of the Sith. But there is one final test that Jacen must pass before he can gain the awesome power of a true Sith Lord: He must bring about the death of someone he values dearly. What troubles Jacen isn't whether he has the strength to commit murder, but who the sacrifice should be.

The novel starts off with Mara Jade Skywalker worrying about her son, Ben, since he had gone missing in the previous novel. Her husband, Luke, tells her that there is nothing to worry about, as he can sense Ben through the Force. Mara says that she can, too, but her worries extend beyond that of Ben's safety.

Ben returns from his mission to Ziost piloting the Sith Meditation Sphere aboard the Anakin Solo and giving the Amulet of Kalara to his cousin, Jacen Solo. With the ship put under restriction by Jacen's crew, Lumiya decides to take the ship under his supervision and reminds him that the time for his sacrifice is nearing.

On Mandalore, Boba Fett declares the nation's neutrality in the war before he sets out with his granddaughter, Mirta Gev, to find the clone with the gray gloves that she mentioned when she first met him. They find the clone, Jaing, and ask for a sample of his blood so that it can be used under experimentation in order to find a cure for Fett's cell degeneration, as the double-aging process in Jango Fett clones had been neutralized in Jaing thanks to the machinations of his late adoptive father Kal Skirata. Jaing refuses to give Fett and Mirta what they want, leaving the two of them empty-handed as they return to their home planet. But they are greeted by the discovery of new lodes of beskar that was revealed thanks to the Yuuzhan Vong's attack during the war against them. The Mandalorians decide to make new invulnerable ships called with the new lodes, and thanks to Fett, they decide to side with the Verpines on Roche against Murkhana, as Roche declared Murkhana to be selling similar products in the market. What the Mandalorians want in return is trade with Roche. And because Murkhana is a Galactic Alliance state, it appears as though that the Mandalorians will be siding with the Confederation in the war. In the meantime with Fett, he meets the man nicknamed Kad'ika, whose real name is Venku, and he gives him the cure to his degeneration for reorganizing Mandalore as a true leader. Fett's arc in the novel, after being cured, comes to an end when he realizes that his ex-wife, Sintas Vel, was not dead, but frozen in carbonite for 38 years.

In the Galactic Alliance, Jacen decides to cement more of his power in the government by improving weaponry conditions for the Galactic Alliance Guard. He also assigns Ben with fellow GAG agents Jori Lekauf and Lon Shevu to the planet Vulpter in order to assassinate Corellian Prime Minister Dur Gejjen while he is on a meeting. But GAG also finds out that the nature of Gejjen's meeting is to discuss terms of peace with GA Chief of State Cal Omas without the consent of the Alliance government. Jacen and his military ally Supreme Commander Cha Niathal decide to plot a coup against Omas and take over the government for the sake of Coruscant and the rest of the GA until the war ends. Then, on Vulpter, Ben assassinates Gejjen by shooting him in the head, but before he is able to escape with Lekauf and Shevu, Vulpter Security begins to check everyone in the area for weapons to root out Gejjen's assassin. Lekauf takes the weapon that Ben used to kill Gejjen from him and acts as a Corellian terrorist who was against Gejjen. He backs up to a Corellian shuttle with an innocent woman as a hostage, and after letting the hostage go as Lekauf enters the shuttle, he blows himself up to Ben's horror. Ben and Shevu escape. Then, following the assassination, Jacen arrests Omas after he returns to Coruscant, and he and Niathal formally declare their takeover of the government, though neither of them are formally the Chief of State.

Ben, still grieving and blaming himself for Lekauf's death, eventually finds out that Jacen and Lumiya are working together after overhearing a conversation between them (the only reason that Jacen did not sense him in the Force was because he taught Ben to hide in the Force like he does). Ben then tells his mother about this, and she confronts Jacen to try to coerce him into coming back as a genuine Jedi. But Jacen refuses, prompting Mara to plan his death, as she follows him through Lumiya and her Sith ship via a tracking beacon placed upon the latter. Jacen visits his lover Tenel Ka Djo and his daughter Allana on Hapes, and Lumiya, through the Force, finds out about Jacen's love for them. Despite this, she does not prompt him to choose either of them as his sacrifice, though he does try to kill her for this knowledge, and then Mara attacks Jacen in a StealthX X-wing starfighter duel while Ben captures Lumiya and the Sith ship. However, Mara's StealthX is shot down and she lands on Kavan, luring Jacen to hunt her down. They fight each other in a sewer tunnel and Jacen wins (albeit barely) by killing Mara via a poisonous dart in the leg. Despite Jacen's claims that he is trying to improve the galaxy, Mara accuses him of being as bad as the late Emperor Palpatine and vows that Luke will defeat him, just before she dies. Her death is sensed by both Ben and Luke, and they are thrown into shocked grief. Lumiya, meanwhile, feels a turning point in the Force which wordlessly tells her that Jacen has made his sacrifice, and he is now powerful enough to be a Sith Lord. Luke immediately blames Lumiya for Mara's death, tracks her down onto Terephon and duels her. He wins the duel by decapitating Lumiya, believing that he has avenged Mara. The Sith Meditation Sphere is stolen, and Ben later takes Mara's corpse back to Cilghal for evidence as to her death, where Ben tells Luke that he was with Lumiya at the time Mara died, therefore, Lumiya could not have killed Mara. With that, Luke falls into even deeper grief, for not only is Mara dead now, but he killed the wrong person, and for the wrong reasons. In conclusion, Lumiya has hurt Luke more than she ever could have in life.

In the aftermath of Mara's death, Jacen acquires new Force powers that allow him to direct GA battles with precise accuracy. He then names himself Darth Caedus, the new ruler of the Sith.

The novel's front cover featured a youthful-looking Mara Jade Skywalker, while the back cover displays an older Luke Skywalker. The image of Mara, who at the time of Sacrifice would be 58 years old proved controversial among fans[source?] who believe that it depicts her inaccurately, although some authors depict Mara as "eternally youthful."[source?]

Some fans, including Shannon McRandle, the professional model who represented Mara Jade for the Star Wars card games, had expressed their displeasure for Legacy of the Force: Sacrifice due Mara's death. McRandle herself has stated that she believes that if one person was able to kill Mara Jade, that was Timothy Zahn, who created the character in Heir to the Empire.[5] Despite this, Karen Traviss has confirmed that she wasn't the one who pitched the idea to kill off Mara Jade, and has also stated that she didn't know the character's importance when she was introduced to her.[6] 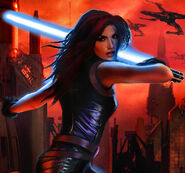