Leia and the Great Island Escape

Leia and the Great Island Escape is a young readers book which adapts events from the junior novel Moving Target: A Princess Leia Adventure. Moving Target was written by Cecil Castellucci and Jason Fry, the latter of whom adapted it into Leia and the Great Island Escape. The book was published by Disney–Lucasfilm Press on December 6, 2016. The story was later republished as part of the young-reader story collection Galactic Adventures Storybook Collection on October 2, 2018.[2]

Leia and her team of rebels must outwit the Empire, avoid perilous pirates, and escape from a volcanic island planet before it's too late![1] 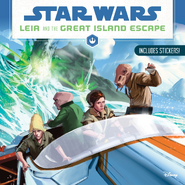 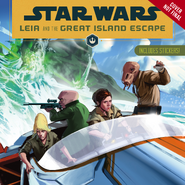 In other languages
Retrieved from "https://starwars.fandom.com/wiki/Leia_and_the_Great_Island_Escape?oldid=8838219"
Community content is available under CC-BY-SA unless otherwise noted.