Myths & Fables is a canon short story collection written by George Mann and illustrated by Grant Griffin. It is comprised of nine in-universe stories, and it is part of the Star Wars: Galaxy's Edge media project. It was first published by Disney–Lucasfilm Press on August 6, 2019, and an audiobook version was also produced.

Beautifully illustrated, this unique treasury of in-world space tales takes readers to the far reaches of the Star Wars universe…including to the remote outer rim world of Batuu from Galaxy's Edge. 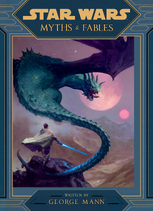 In other languages
Community content is available under CC-BY-SA unless otherwise noted.