The Forest Moon
New Alliances is the second Force Pack in the Endor cycle for Fantasy Flight Games' Star Wars: The Card Game. It was released on January 29, 2016.

“Well, short help is better than no help at all.” –Han Solo, Star Wars: Return of the Jedi

Descend to the Sanctuary Moon of Endor in New Alliances, the second Force Pack in the Endor cycle for Star Wars™: The Card Game! The Rebel heroes have reached the floor of the Sanctuary Moon, but they quickly discover that they are not alone. The native Ewoks are formidable warriors in their forest home, and they could be crucial allies in the fight to destroy the Empire.

In New Alliances, players gain six new objective sets (two copies each of four normal objective sets and one copy each of two “limit one per objective deck” sets). Like other packs in the Endor cycle, New Alliances introduces new mission cards – objectives played under your opponent's control that offer powerful benefits when destroyed. With the return of neutral objective sets and three brand-new fate cards, New Alliances is sure to change your decks forever, whether you participate in the illicit spice trade, lock down the sector with the Imperial Navy, or join the Ewoks in the fight against the Empire! 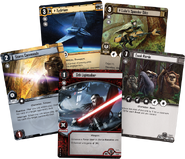