"There will be a substantial reward for the one who finds the Millennium Falcon. You are free to use any methods necessary, but I want them alive. No disintegrations."
"As you wish."
―Darth Vader and Boba Fett[src]

No Disintegrations is a roleplaying game supplement focusing on the Bounty Hunter career in Fantasy Flight Games' Star Wars: Edge of the Empire series. It was released on February 2, 2017.

As a pragmatic, shrewd, and dangerous Bounty Hunter, you have a unofficial, galaxy-wide license to hunt and even, if you like, kill. The quarry and the reward is up to your contractor, but all the rest, from how you catch that quarry to what you do with it, is up to you. There aren't that many rules that you adhere to, but there are many sentients throughout the galaxy that fear you.

No Disintegrations, a sourcebook for the Star Wars®: Edge of the Empire™ roleplaying game gives you the tools and talents necessary to succeed as a Bounty Hunter, as well as the adventure material that Game Masters need to make that hunt thrilling, suspenseful, and a good challenge. Within its ninety-six full color pages you'll find new species, three Bounty Hunter specializations and two Signature Abilities, plenty of iconic vehicles, sophisticated gear, and much more. 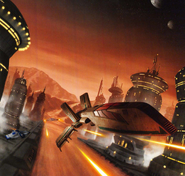 Explore all of Wookieepedia's images for this article subject.
In other languages
Retrieved from "https://starwars.fandom.com/wiki/No_Disintegrations_(Fantasy_Flight_Games)?oldid=9391766"
Community content is available under CC-BY-SA unless otherwise noted.