For other uses, see Outlander (disambiguation).

Where are you going, Master?"
"For a drink.Anakin Skywalker and Obi-Wan Kenobi

The Outlander Club, also called the Outlander Gambling Club, was a popular gambling establishment and nightclub located in the Uscru Entertainment District on the planet Coruscant.

The Outlander Club was a gambling establishment and nightclub situated in the lower levels of the planet Coruscant's Uscru Entertainment District. It was a popular and busy location for both the higher echelons of Coruscant society and those engaged in more sinister activities. The club had a central bar which offered drinks and various cutouts where patrons could place bets on sports activities occurring across the galaxy such as podracing and grav-ball. Since the bar was located in a less developed region of the Entertainment District, many illegal activities were proudly displayed here. Criminals and other individuals who did not want to garner attention would use the club and surrounding areas to sell illicit goods such as death sticks. Fugitives often used the constant crowds moving in and out of the club to shake pursuit.[1] Patrons of the nightclub wore flamboyant outfits, designed to grab attention on the dance floor or at the gambling tables. Colors that caught the eye were always popular, as were sheer or metallic fabrics.[3]

The Outlander was once a small and stylish establishment that catered to high class individuals. A game known as Outlander developed here. Under the management of the Baath brothers, the club expanded to accompanied other gaming trends and had become a frequent meeting a place of Coruscant's criminal networks.[4]

Just days before the outbreak of the Clone Wars, the Jedi Knight Obi-Wan Kenobi and his apprentice, Anakin Skywalker, pursued and subsequently captured the bounty hunter Zam Wesell who retreated into the club following a failed attempt to assassinate Senator Padmé Amidala. After being disarmed and taken by the Jedi into an alley behind the cantina, Wesell was killed by fellow bounty hunter Jango Fett before she could reveal her co-conspirator's identity.[2]

In 14 BBY,[5] during a hyperspace travel Greez Dritus recalled the Outlander Club as one of his favorite places that he could never go back. Greez told Cere Junda that he won some memorable sabacc pots there.[6] 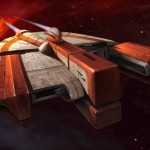