Wookieepedia
Register
Don't have an account?
Sign In
Advertisement
in: Canon articles, Articles in need of updating, Padmé Amidala's wardrobe

Padmé Amidala was a Naboo human female who served as Queen[1] and later Senator of her homeworld, the planet Naboo.[8] She maintained a large wardrobe of elegant, ornate, and occasionally elaborate disguises, dresses, and robes[1] throughout her life with the assistance of her handmaidens.[3] Many items in her wardrobe were decorated with the Symbol of the Royal House of Naboo,[10] also known as the Queen's crest.[3] Her wardrobe was adjusted again during her pregnancy. After her death, her body was dressed in a funeral gown[11] that evoked the water she had loved in life.[3]

Eirtama Ballory: "Is this an original or a replica of a historical piece? It must be super uncomfortable."
Padmé Amidala: "It is. An original and uncomfortable, I mean."
Eirtama Ballory: "I can design one that looks exactly the same and weighs half as much. No one will know the difference except for us."
Suyan Higin: "Let me see that. Oh, yes, we can improve this. I think it was made before Karlini silk was imported in bulk, and there's no reason we can't duplicate it in a more wearable style. This one can go in a museum or something."
―The handmaidens soon to be known as Eirtaé and Yané discuss their new queen's wardrobe[2]

Queen Amidala wore traditional, stylized royal makeup that included a red scar of remembrance, a stripe painted on the lower lip to symbolize the suffering endured by the Naboo before the Great Time of Peace.[10] Her face and fingernails were painted white,[1] though at times only her thumbnails were painted. The Queen's hairstyles, which were said to take several hours to perfect,[10] were headpieces with wigs that matched Padmé's natural hair color. Her real hair was tightly-braided, pinned down, and gelled; the gel held the headpieces in place and prevented them from itching.[2] While the Queen's hairstyles were being created, her handmaiden Rabé would provide counsel.[10] Queen Amidala's makeup helped to mask her features and her headpieces distracted from her face; these made it easier for Sabé, the Queen's decoy, to serve as the Queen while Padmé stepped into the role of a handmaiden.[3]

Two of Amidala's handmaidens, Eirtaé and Yané, had significant roles in establishing the Queen's wardrobe after her election. Yané was a talented weaver and Eirtaé was an engineer. Working together, they designed new garments and headpieces and replicated historic items to make them lighter in weight than they seemed to be while still having an elaborate appearance.[2] They incorporated additional considerations for safety and security, such as fabrics treated with blaster-resistant resin and jewelry containing concealed recording devices or personal shields. The heaviest dresses served as a physical barrier surrounding the Queen, but were also designed to be quickly removed when free movement and speed were needed.[3] Many of the decorative elements of Amidala's royal garments came from the treasure rooms of Theed Royal Palace, such as gold beads and suspensa ornaments—strings of suspended beads.[10] 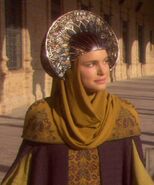 Separatist shroud (with hood up)

Separatist shroud (with hood down)

"You call this a diplomatic solution?"
"No, I call it aggressive negotiations."
―Anakin Skywalker and Padmé Amidala —

Handmaiden battle dress (as a senator) 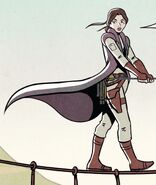 Action costume (on the Malevolence)

Tunic and leggings (while pregnant)

"Working alongside such renowned senators as Mon Mothma of Chandrila and Onaconda Farr of Rodia, young Amidala is helping serve the galaxy while still respecting her homeworld via her style and manner of dress, called 'tasteful' and 'traditional chic.' Senator Amidala is a fresh new face that the Senate needs."
―TriNebulon News[3]

Padmé Amidala's wardrobe as the Queen no longer suited her role when she became the Senator. Senator Amidala's wardrobe was adjusted to use darker colors and be less physically distancing.[3] However, when attending to Senatorial duties while pregnant, Amidala resumed wearing dresses with more structured silhouettes to disguise her pregnancy.[11] 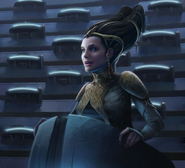 Lavender-gray dress (with hood down) 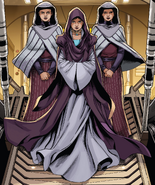 Lavender-gray dress (with hood up)

Green velvet dress (with hood down)

Green velvet dress (with hood up)

"…Obi-Wan, you're sure there isn't anything of value left on board?"
"A few containers of supplies, the queen's wardrobe, maybe."
―Qui-Gon Jinn and Obi-Wan Kenobi[1]

From her election to Queen of Naboo at the age of fourteen[67] up until her death[11] in 19 BBY,[68] Padmé Amidala maintained a vast personal wardrobe. It was a necessity as the Queen[2] and as the Senator representing Naboo.[3] Depending on the occasion, she wore formal clothing selected from her wardrobe for official diplomatic functions or utilized specialist equipment for physically-demanding situations.[8]

Padmé and Sabé, her handmaiden and decoy, worked together to develop the persona of "the Queen" to ensure that either girl could portray the role of Queen Amidala without giving away who was behind the voice, mannerisms, makeup, and wardrobe. The "decoy maneuver" was utilized when Padmé was incapacitated or endangered. Whoever wore the Queen's makeup would be addressed by the other handmaidens as "Your Highness."[2]

The creation of Padmé Amidala's wardrobe began with her election. Initially, the wardrobe system attached to her palace dressing room was stocked with traditional and antique pieces. When she was joined by her handmaidens Eirtaé and Yané, they maintained and added to her wardrobe while additionally developing a corresponding wardrobe for the handmaidens. Yané also blended the cosmetics that were used while at the palace. As Amidala's intelligence officer, Rabé's public duty was wardrobe mistress, providing a reason for her to be near the queen and have access to her personal possessions. She directed the other handmaidens when selecting the queen's attire and packing for her travels.[2] Though Saché did not have a specific duty related to the wardrobe, she practiced styling the others' hair to assist with dressing quickly.[3]

The handmaidens wore identical outfits that complemented the Queen's[10] or helped them fade into the background by matching their surroundings.[3] They used hoods and similar makeup applications to resemble each other as much as possible and further obscure their individual identities. Hoods became a fashion trend on Naboo during Amidala's reign.[2]

A generic brand of makeup[2] and a portion of Amidala's wardrobe were kept on the Naboo Royal Starship for the Queen's use while away from Naboo;[1] Padmé and Sabé both observed the face paint felt different, and it made Sabé's face itch.[2] After the ship and its passengers escaped the planet's invasion by the Trade Federation, they were forced to land on Tatooine for repairs. The price of the necessary parts and the need to raise funds in the local currency led Padawan Obi-Wan Kenobi to comment on the Queen's wardrobe as an item of value.[1]

After Amidala completed her two terms, four of her royal handmaidens retired from her service; only Sabé remained. When she became a senator with new handmaidens, Dormé stepped in as her new wardrobe mistress and Cordé became her decoy.[3] Sabé had privately observed that Padmé Amidala was a different persona from that of Padmé Naberrie;[2] Padmé herself found that the persona used for the Queen was not suitable when she became Senator Amidala, necessitating adjustments to the Senator's wardrobe, voice, and behavior.[3]

"Stunning. Just stunning."
"Yes. It belonged to my mother. They all did."
"She had excellent taste."
"It seems so. I only know her from the things she owned, and the stories told to me by people who knew her. These gowns were kept on Naboo for many years after her death, and eventually found their way to me. These matter to me, very much. I like to think of my granddaughter wearing them—if I ever have one. I want them kept safe."
―Baron Reya and Leia Organa[7]

Following Padmé Amidala's death at the end of the Clone Wars,[11] her wardrobe was kept preserved on Naboo.[7] The traditional jubilation dress had been returned to royal service for other queens such as Dalné to wear. Queen Dalné kept it at the secondary royal palace on one of Naboo's moons, Onoam.[14] Amidala's daughter, Leia, had been adopted and raised on Alderaan by Bail and Breha Organa.[11] On a visit to Onoam, Leia Organa needed something clean and formal to wear, and Dalné loaned her the jubilation dress. Neither of them knew that it had once been worn by Leia's birth mother, but Moff Quarsh Panaka was struck by the resemblance.[14]

Though Leia had not known her birth mother or her identity during her lifetime, Padmé Amidala's wardrobe eventually found its way to her and helped her learn more about who Amidala had been.[7]

"Terex, you know those gowns belonged to one of the great heroes of galactic history, no? Padmé Amidala."
"I'm more concerned with their more recent owner, Lor. These were Leia Organa's. That woman is crafty. Who knows what she might have hidden in these crates? Explosives, poisons… anything. I want them off this ship. And getting rid of these crates while we're in hyperspace means no one will ever see them again. If that causes Organa some future pain, well… so much the better."
―Lor San Tekka, historian and friend of Leia Organa, and Agent Terex of the First Order[6]

By around 32 to 34 ABY,[5] General Leia Organa, leader of the Resistance, sought to locate the scholar Lor San Tekka. The Resistance was in a cold war against the First Order, and the scholar may have known the whereabouts of her missing brother, Luke Skywalker. After discovering San Tekka had been captured by House Maccon on Cato Neimoidia,[69] Organa and her bodyguard, Suralinda Javos, traveled to the planet aboard the general's personal ship in search of the prisoner for extraction. Padmé Amidala's wardrobe was brought to the Neimoidian purse world, as Leia Organa plotted to implant the containers holding her mother's wardrobe into the palace of Baron Paw Maccon, where Lor San Tekka was being held prisoner.[7]

The wardrobe was stored in three separate repulsorlift container racks that were key to the extraction plan. Within the racks were thin metal boxes inlaid with a magenta-colored material, and each box held an individual set of clothing behind a metal grate;[7] the leading box of each rack was hermetically sealed by an additional plate.[6] The box containing Padmé Amidala's lakeside gown led one of these container racks,[7] while the other two were led by boxes modified with a breath mask device that allowed for humans to be stored alive.[70]

By hiding Poe Dameron within one of the modified wardrobe boxes, he could emerge to locate San Tekka, free him from imprisonment, and place him safely inside the other box. To give him that opportunity, the Resistance would stage an incident as a distraction,[70] creating a pretense for Organa to seemingly believe the palace had proven too insecure to safeguard her mother's wardrobe. She would remove the wardrobe to her vessel, thereby extracting San Tekka.[9] The plan for the mission did not succeed.[70]

First Order forces arrived, seeking Luke Skywalker's whereabouts to prevent the Jedi Master from joining forces with their enemy, the Resistance.[9] A brief exchange of fire ensued between Baron Maccon's clientele and First Order forces, during which Lor San Tekka initially escaped amidst the confusion by hiding inside a wardrobe box that was relocated from Maccon's vault to Organa's ship, just as the Resistance had planned. However, the First Order Security Bureau's Agent Terex abducted San Tekka by commandeering Organa's ship afterward.[70]

Terex ignored San Tekka's words about the wardrobe having belonged to Padmé Amidala. Cautious of Resistance tracking beacons or other sabotage and wanting to hurt Organa, Terex jettisoned Amidala's wardrobe from an airlock as the stolen craft traversed through hyperspace.[6]

The finished costumes seen in the prequel trilogy films were realized by costume designer Trisha Biggar and her department.[16] Many of the initial designs were conceived by concept artist Iain McCaig.[71][72][73]