Under the command of Jun Sato, the Phoenix Home was the nerve center of the fledgling Rebel fleet, and it makes its way to Star Wars™: Armada in the Phoenix Home Expansion Pack. What this small-base ship lacks in size and firepower, it makes up with its ability to command your fleet. Along with one pre-painted miniature starship, you will find two ship cards, ten upgrade cards, and all the dials, bases, pegs, and tokens you need to control the battle, more effectively coordinating your capital ships and fighter squadrons alike.

The Phoenix Home Expansion Pack contains 1 miniatures, plus a maneuver dials and action tokens, as well as ship and upgrade cards. 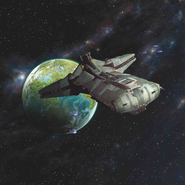