The Profundity Expansion Pack is a supplement to the tactical naval warfare game, Star Wars: Armada, published by Fantasy Flight Games, and part of the seventh wave. The expansion features a detailed miniature of Admiral Raddus's flagship, the Profundity. It was announced on August 25, 2017,[2] and released on February 1, 2018.[1]

With its powerful ship and cunning commander, the Profundity Expansion Pack for Star Wars™: Armada lends new hope to the rag-tag Rebel fleet. Its miniature pre-painted MC75 star cruiser boasts an impressive array of weapons, armor, and shields, and it comes with two ship cards and fourteen upgrades that feature Admiral Raddus, Jyn Erso, and other notable characters from Rogue One. Together, these crew members and the Profundity Title upgrade allow you to make a wide range of clever adjustments to your overall strategy.

The Profundity Expansion Pack contains a miniature, plus a maneuver dials and action tokens, as well as ship and upgrade cards. 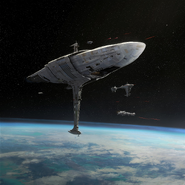