The Rebel Alliance Conversion Kit is a tactical ship-to-ship combat game released by Fantasy Flight Games on September 13, 2018. It was announced on May 1, 2018. It is a conversion kit that allows for the components of the discontinued X-Wing Miniatures Game to be incorporated into the X-Wing Second Edition.

From the blazingly fast A-wing to the iconic Millennium Falcon, the Rebel Alliance fielded a great number of starships during the interstellar battles of the Galactic Civil War. Between the Rebel Alliance Conversion Kit and the extensive catalog of first edition expansions, these ships are available to join your squadron from day one.

Within this conversion kit, veteran players will find all of the components necessary to upgrade their existing Rebel ship collection from the first edition of X-Wing to the second edition. The conversion kit contains a vast array of new ship cards and tokens, including iconic pilots such as Han Solo, alongside more than one-hundred upgrade cards that give you the power to customize your squad to fit your playstyle. Finally, the conversion kit also includes the second edition maneuver dials for each ship, which makes planning your actions easier than ever before. 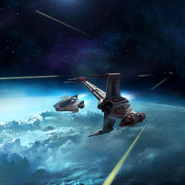